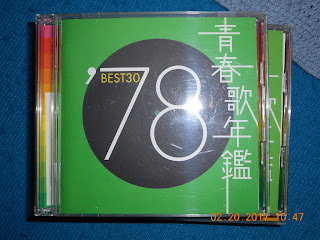 Commenter Justin, a few days ago, referred me to Xerf Xpec's recent upload, smoky singer Naomi Chiaki's（ちあきなおみ）January 1978 studio album "Amagumo" (Rain Clouds) . She recorded quite the conversation piece since it brings together three musical acts that I hadn't expected would work together. For one thing, Chiaki, someone that I've usually associated with Mood Kayo and regular Japanese pop, has the backup of the band Godiego（ゴダイゴ）, and for another, all of Side A of the original record was written and composed by the late singer-songwriter Eigo Kawashima（河島英五）, the man behind the introspective folk classic and karaoke favourite, "Sake to Namida to Otoko to Onna" （酒と泪と男と女）.

I've heard the first couple of tracks including the title track from "Amagumo", and I think that all involved including Chiaki were going for something different from their own worlds. At this point, I'd say that the album was perhaps going into a more City Pop direction but without having heard the other tracks thus far, I will go with 1970s New Music for now.

However with the first track, "Amagumo", there is something very sensual and sultry which matches the smokiness of Chiaki's voice. In the first several seconds of the song, there is a feeling of early morning hours but when all of the instruments come into literal play, I realize that it is most likely a case of a setting sometime during a rainy day as the title hints at, with Chiaki or her avatar being in a very hip coffee house somewhere in Shinjuku or Roppongi while she stares through the window with spatters of raindrops.

Kawashima's melody weaves among City Pop, jazz and the more urbane corner of New Music so it's not particularly easy to categorize "Amagumo" into one particular genre. But there are obviously no complaints from me about it as this song also reminds me of how another wonderfully cool chanteuse, Mai Yamane（山根麻衣）, started out a few years later. One last observation about the album itself is how similar the silhouette of Chiaki is to the one given on the cover of Bill Evans' famous "Waltz for Debby". Was this some sort of homage to the amazing jazz pianist?