Ambrosia -- Biggest Part of Me 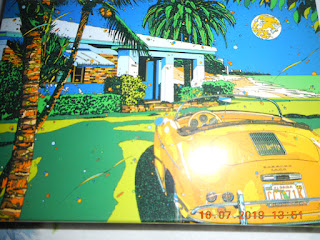 I'm really going to have to invest in an Eizin Suzuki calendar next year.

Anyways, I realize that I have already put up a ROY article for this week but at the same time, I'm going to exercise Administrator's privilege and write up a second one. The reason is that I haven't contributed a ROY article on an AOR tune in a long while...the one that I remember off the top of my head is Pages' "Who's Right, Who's Wrong" from last September. That is almost a year and considering that I do love my soft rock, before I'm forced to hand in my Perrier bottle in shame, it's time to get another light and mellow tune from my musical memories up here in Reminiscings of Youth.

My choice tonight is Ambrosia's "Biggest Part of Me" from March 1980. I used to hear this song by this soft rock/jazz fusion band all the time on the radio (and in doctors' offices), and at that time when I was a kid, I thought it was a pleasant enough ditty. But decades later, while I was in Japan and folks there (including myself) were getting into the American AOR boom through remastered CDs, hearing "Biggest Part of Me" again just launched the effervescent bubbles of Perrier percolating in my head. Translation: I appreciated it a whole lot more. And apparently, so did the charts way back when. In Canada, the song went as high as No. 18 on RPM and on the Adult Contemporary chart in the United States, it hit No. 3.
What can I say? David Pack was the man who created the song and sang it, and during the 2000s to hear this song once more among the other formerly forgotten delights on those AOR compilation discs that I'd bought at Tower Records and Yamano Music was quite the aural manna from Heaven. All of "Biggest Part of Me" is great but there's that Ernie Watts' sax solo in the middle which still sends shivers up and down my spine. Yup, I'm an AOR otaku!😛
So, what was coming out into the record stores in Japan while "Biggest Part of Me" was coming out in the record stores in Canada and the United States (and perhaps Japan, too)? Well, according to Showa Pops, these three were.
Mariya Takeuchi -- Fushigi na Peach Pie （不思議なピーチ・パイ）
Toshi Ito and Happy & Blue -- Gaman Dekinai wa（我慢できないわ）
Yoshimi Iwasaki -- Aka to Kuro（赤と黒）
Posted by J-Canuck at 8:31 PM