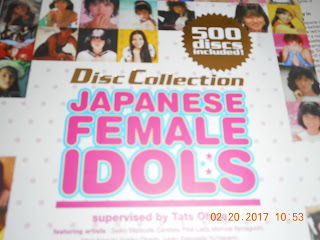 In the 9 1/2 years that I've been involved with "Kayo Kyoku Plus", there have been the gradual transitions on a number of levels. For one thing, in the aidoru section, I of course started off with the famous superstar aidoru including Seiko Matsuda（松田聖子）and Akina Nakamori（中森明菜）and their many hits, but over those many years, I no longer highlight them so much anymore since I have covered a lot of those hits. Instead, I seem to be coming across those 1970s and 1980s teenybopper singers who had far less than their 15 minutes of fame and have remained somewhat mysterious...at least until now.

Well once again, I have found another such aidoru. Her name is Aiko Togawa（都川愛子）and there's absolutely nothing that I could find out about her outside of those three singles that she released. Her debut single from August 1979 was "Kinjirareta Koukishin" (Forbidden Curiosity) with the B-side being "Love Point Getter".

Uploader Yoshi Imamura has actually put the B-side first so I will talk about "Love Point Getter" appropriately first as well. Written by Mickey Uchida（ミッキー内田）, composed by Yasumi Matsuo（松尾安巳）and arranged by Jun Kamiyama（神山純）, this song has got that spirited 1970s aidoru beat with the alternately cutting and silky strings and the electric guitar, and it sounds as if it were from an earlier time in the decade (aside from the boopy synths), something more along the lines for a younger Momoe Yamaguchi（山口百恵）or Hiromi Iwasaki（岩崎宏美）. However, what really stands out are Togawa's vocals. I can't really describe them except that they sound quite distinct and perhaps I can say that they are an aidoru's equivalent of pop singer Machiko Watanabe's（渡辺真知子）own vocals.

From 3:02 is the A-side, "Kinjirareta Koukishin", which was created by the same trio that I mentioned in the above paragraph. Togawa does sound quite different and more innocent here in this song that has more of that exotic kayo feeling thanks to what I think is a mandolin strumming away. The silky strings are still there, though.

According to "idol.ne.jp", Togawa released one more single in February 1980, "Mokuren"（もくれん...Lily Magnolia）, and then it would be many years until a third single, "Osaka Love Story"（大阪ラブストーリー） was released in June 1992. I can't find any sign of this song on YouTube and I'm wondering whether Togawa had intended to make a comeback with something more Mood Kayo.