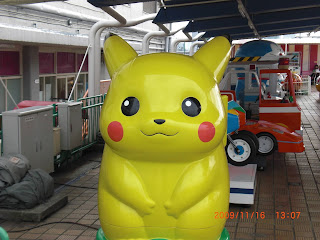 I figured that for a song with this title, Pikachu would fit the thumbnail bill.

Well, for a blistering Hump Day today, I think something like a relaxing 1970s New Music song would be appropriate to help in some cooling down. Therefore, why not go with "Fuwa Fuwa WOW WOW" (Fluffy Fluffy WOW WOW), a footloose and fancy-free tune from Seri Ishikawa（石川せり）via her January 1976 sophomore album, "Tokidoki Watashi wa..."（ときどき私は…Sometimes I...）?

With lyrics by Ranbo Minami（みなみらんぼう）, music by Yasuo Higuchi（樋口康雄）and jazzy arrangement by Mitsuo Hagita（萩田光雄）, "Fuwa Fuwa WOW WOW" is a truly short song at a little over 2 1/2 minutes, but considering how the protagonist simply desires a light and happy life, I gather that extending it any longer could have risked adding a little too much gravitas. There's some of that skippy piano, fleet-footed Latin guitar and a bluesy saxophone contributing to the fun. Still, the song, and the album for that matter, has quite the pedigree behind it in terms of musicians. Sugar Babe（シュガーベイブ）and Singers Three（ シンガーズ・スリー）are helping out on backing vocals, Tsugutoshi Goto（後藤次利）is on bass, and then there are Akiko Yano（矢野顕子）and Masataka Matsutoya（松任谷正隆）on the keyboards. The album, which peaked at No. 34 on the Oricon chart, also has Ishikawa's "Hitori Shibai"（ひとり芝居）which I wrote about back in 2018.

A single version of "Fuwa Fuwa WOW WOW" was released a few months later in April and in place of the jazz, a bit of progressive rock seems to have seeped into the arrangement. It's still the same short length and has that lightness, but I prefer the original album track.