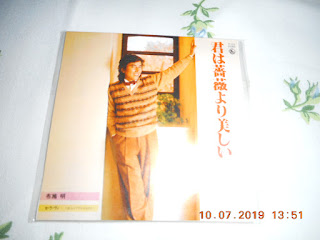 Uh...those post-lunch and post-work afternoons are getting tougher on me, especially when it's a summer day. It's been difficult keeping the eyes open and even a round of watching the Portals scene from "Avengers: Endgame" hasn't quite brought the needed energy.

Indeed maybe some dance, dance, dance would be just the thing....if I were younger. And able to dance, of course. However, I am neither so I will just go with this Akira Fuse（布施明）song instead. "Dance Dance Dance" is the first track on his August 1980 album "I AM" and you bass-loving folks in the City Pop fandom will especially love this one since the bassist lays on the funk and disco right from the top. And this time, Fuse doesn't unleash that wave motion gun of a voice; he keeps things low-key throughout.

"Dance Dance Dance" has a Kazuo Shiina（椎名和夫）arrangement that reminds me of Makoto Matsushita's（松下誠）light and bright approach to the city with Fuse himself creating the melody. But the interesting thing is the lyricist who is listed as one Olivia H. Fuse according to one blog page paying tribute to the singer. If I'm not mistaken, this is actress Olivia Hussey who had just gotten married to Fuse in 1980 and stayed that way for the better part of a decade. To be honest, though, the only movie in which I remember her is the 1968 version of "Romeo and Juliet".