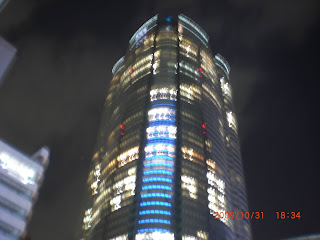 Let's consider the above photo of the Mori Tower in Roppongi Hills at night as one that had been taken by a guy who enjoyed a little too much of the strong stuff. Plenty of bars in Roppongi, y'know...especially the notorious Gas Panic.

Anyways, that's one mighty fine cover of singer-songwriter Kuniko Fukushima's（福島邦子）1981 album "Grace". Moreover, I've also been enjoying one of the tracks there, her June 1981 single "Boogie-Woogie". Written and composed by Fukushima and arranged by Ichizo Seo（瀬尾一三）, there's some funky boogie and strut going on as the song moves in the same way as that photographer that I just mentioned above after a few drinks along the main Roppongi strip. The piano and the electric guitar are having an especially good time.

Just another Friday night in Roppongi. Even when I was living there in the 1990s and 2000s, it was still quite the happening place. I can only wonder what it was like in the 1980s as Japan was heading into the Bubble Era.