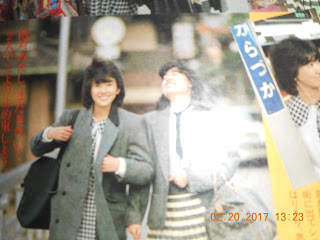 I have to say that though the lyrics of eternally being connected to one's love and the title of "Dakishimetai" (Want to Hold Onto You) have probably become so common as to approach cliché, the music for this particular song is pretty gosh-darn delicious.

"Dakishimetai" is 80s aidoru Iyo Matsumoto's（松本伊代）5th single and there's barely anything about this song in J-Wiki aside from the songwriters and the fact that it did exist. Just to get that out of the way, it was released in November 1982 with Chinfa Kan（康珍化）on lyrics, Toshio Kamei（亀井登志夫）on music and Shiro Sagisu（鷺巣詩郎）handling the arrangement. It did well on Oricon by breaking into the Top 10 at No. 9.

However as I mentioned off the top, Kamei's music with Sagisu's arrangement make "Dakishimetai" a cut above the average aidoru tune...at least to me, anyways. I wouldn't categorize it as a technopop tune despite the Asian-flavoured synthesizer and the light gong at the beginning although it did make me wonder when I first heard it whether either Ryuichi Sakamoto（坂本龍一）or Haruomi Hosono（細野晴臣）were helping out here as they have so many others during that time. But it isn't just the intro...it's also that mixture of that exotic kayo from the late 1970s and light Baroque Pop/Fashion Music and specifically, even that guitar which unleashes a sonic launch of sorts whenever Iyo-chan goes into the refrain. It's quite the cute little buffet, musically speaking.