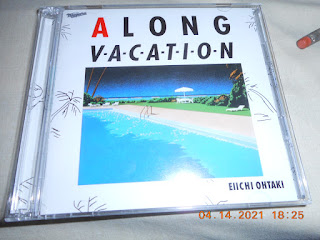 Forty years ago on March 21st 1981, the late singer-songwriter Eiichi Ohtaki（大滝詠一）released an album that would become his magnum opus, "A Long Vacation". It would get a ton of accolades and it finished just behind Akira Terao's（寺尾聰）"Reflections" as Oricon's No. 2 album of the year.

I've already covered the album along with some of the other tracks that I've covered individually, and in fact earlier today, some of us got together on Rocket Brown's "Come Along Radio" to go over "A Long Vacation" (which will be appearing on some platform sometime in the weeks to come). One song that I had yet to profile on "Kayo Kyoku Plus" was the second track on Side A, "Velvet Motel" that was a work between lyricist Takashi Matsumoto（松本隆）and composer Ohtaki.

Imbued with that iconic Ohtaki sound that imbues most of the tracks on "A Long Vacation", "Velvet Motel" is kinda like that Act I in a romance-comedy: it's carefree and comical before the more dramatic elements enter and contrasts nicely with the epic "Kimi wa Tennen Shoku"（君は天然色） that begins the album. And interestingly enough, Matsumoto's lyrics actually relate a story of a couple checking into that titular motel with the guy ending up sleeping on the couch due to a tiff that night, although there is some amiable teasing back-and-forth between Ohtaki and special guest Rajie（ラジー）that becomes more prominent once the headphones are put on.

I found out yesterday that in November 2009, a tribute album to the works on "A Long Vacation" was released titled "A Long Vacation from Ladies" in which a number of veteran female singers do their cover versions of Ohtaki's tracks. Taeko Ohnuki（大貫妙子）, Miki Imai（今井美樹）, Hiromi Ohta（太田裕美）and Ami Ozaki（尾崎亜美）are included in the list.