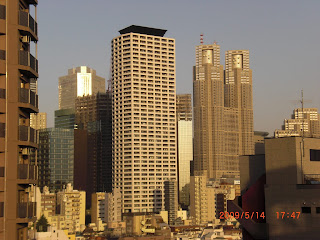 Monday night and it's feeling rather steamy in my room so I've got the ancient fan going on at a good clip. We've got a Humidex going into the high 30s Celsius today and therefore I will need the air conditioning to prevent myself from collapsing onto my keyboard. I was actually saving this song for the official start of summer in a few weeks but considering the weather right now, I think tonight is just as good a time.

Bringing back the Junko Yagami（八神純子）file to around the turn of the decade from the 1970s into the 1980s, I have this song called "Natsu no Hi no Koi" (Love on a Summer Day) which is the B-side to her November 1980 10th single "Mr. Blue"（Mr.ブルー）. Yagami took care of the music while Yoshiko Miura（三浦徳子）brought the lyrics of the torrid ups and downs of love on the beach. Masaaki Omura（大村雅朗）handled the arrangement.

"Natsu no Hi no Koi" isn't what I would call either a City Pop or an AOR tune but it's simply a happy Latin-spiced New Music sort of number to get me up and doing an appropriate jig...with the help of several cocktails imbibed within a few minutes of each other. However, I can understand why it was the B-side because though it's the usual Yagami good tune, it doesn't quite overtake the hill to get into hit A-side status. It's pleasant but doesn't have quite the left hook to punch it through.

Aidoru Naoko Kawai（河合奈保子）would cover "Natsu no Hi no Koi" as the B-side for her own single, her 17th to be specific, "Control"（コントロール）which was released in June 1984. Plus, it was also part of her 8th original album "Summer Delicacy" from the same month as the single. This version has a bit more speed and although it was also arranged by Omura, it gets a little closer to the City Pop/AOR area and in fact, there are parts of it which strike me as being rather Tetsuji Hayashi（林哲司）via Omega Tribe（オメガトライブ）. Again, as with the Yagami original, it does fine as a happy B-side.

I will have to eventually take a look at those A-sides for both Yagami and Kawai soon enough.