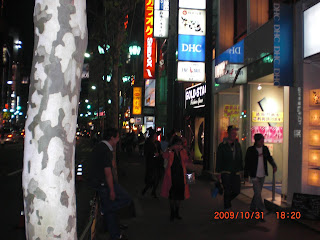 Is that Agatha Harkness in the photo? Not sure but the above is actually a shot of Roppongi during Halloween night 2009. There are plenty of areas in Tokyo which have their various drinking establishments and certainly Roppongi was one of them. Although I was never much of a drinker, I did go with the gang to Shinjuku, Shibuya, Yurakucho, Shimbashi, and yes, Roppongi for the rounds at the local izakaya or even the odd Irish pub.

I can honestly say, though, that my shadow never frequented a bar in the Yaesu area which is right by Tokyo Station, although I came fairly close with that visit to a Yurakucho hole-in-the-wall one night. And that is my segue for Hikota Aoi's（蒼彦太）3rd single from September 2014, "Yaesu no Sakaba" (Yaesu Bar). Back in 2019, I contributed an article for what was at the time, his most recent single "Udatsu"（梲）from January that year (he came out with another single in 2020).

"Yaesu no Sakaba" is an enka tune that got me right from the start with that nostalgic accordion and then the Latin guitar poured on in. Written by Kyosuke Kuni（久仁京介）and composed by Akito Yomo（四方章人）, the song is an affectionate tribute to that beloved watering hole as Aoi describes it as that locus for people from all walks of life in all sorts of stages in their lives. The melody also screams traditional and welcoming comfort through heartwarming libation.

The same songwriting duo was behind the coupling song for "Yaesu no Sakaba", "Iwashigumo" (Mackerel Sky) which literally translates as "Sardine Sky" (to each country, its own fish). This one is done a whole lot more wistfully as Aoi sings about a fellow in the big city pining about how much he wants to return to his hometown but knowing that he can't due to unknown circumstances. At this point, the titular sky may be the only link between him and the old town.

I had just written about one of Yomo's very early compositions, the very melodically different "Shiroi Kassouro"（白い滑走路）for Terumi Azuma（東てる美）all the way back in 1978. Yomo has definitely gone into more traditional music in the last several years at least.