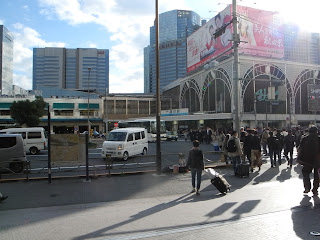 Pretty much any station in Tokyo will have its fair share of taxis waiting for fares (and I'm hoping that over the past year, the industry has been hanging in there, although it seems that the megalopolis has been quite relaxed in its restrictions compared to here), and above is one of the main stations in the city, JR Shinagawa Station. I can't quite remember whether I ever took a cab from this particular depot but I did go there a number of times and even partook in some McDonalds across the street. In fact, I took the photo here in front of the Golden Arches.

For her December 1976 10th single during her aidoru days, Yuko Asano（浅野ゆう子）released "Moonlight Taxi", a quick and chipper tune about her enjoying that time in the big city with her chariot being the good ol' cab. Written by Jun Hashimoto（橋本淳）and composed by his frequent partner Kyohei Tsutsumi（筒美京平）, the arrangement by Tsutsumi and Mitsuo Hagita（萩田光雄）has got some of that romantic disco interwoven with that high-pitched teen voice of Asano. The horns are plenty funky and the strings shimmer even more in the instrumental bridge thanks to some sort of filter, it seems.

The strings continue to stand out on the B-side of "Ringo no Kokoro" (Heart of An Apple) since their arrangement reminds me of a similar thing for Pizzicato Five's "Ice Cream Meltin' Mellow" from the group's "Romantique '96" album. Everyone on the songwriting team for the A-side is back here for "Ringo no Kokoro" which starts off with a playful piano and bass/guitar before it all gives way to those soaring strings. I gather that both songs are the quintessential semi-disco aidoru tunes of the decade.