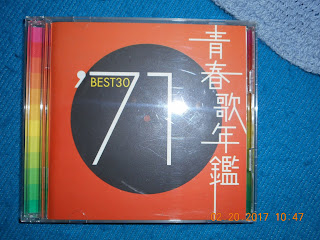 Over three years ago, I wrote about an old kayo chestnut titled "Dareka ga Kaze no Naka de"（誰かが風の中で）from January 1972 by singer/actor Tsunehiko Kamijo（上條恒彦）. It reminded me of those heroic theme songs for American Western shows such as "Gunsmoke" or "Bonanza", except that it was used as the theme song for a samurai drama. We are talking about Japan after all.

Well, a few months earlier in November 1971, there was a previous single, "Tabidachi no Uta ~ Ushinawareta Toki wo Motomete" (The Song for Setting Off on a Journey ~ In Search of Lost Time) that was a collaboration between Kamijo and the folk group Rokumonsen（六文銭）. Two of the members from that group, Kohei Oikawa（及川恒平）and Hitoshi Komuro（小室等）, were responsible for words and music respectively (Komuro also composed "Dareka ga Kaze no Naka de"). And this was another rousing song that has actually lingered in my mind as well.

As is the case with the later "Dareka ga Kaze no Naka de", there is a heroic quality to this particular song as once again Kamijo sounds much older than his 31 years when "Tabidachi no Uta" was released and comes across as a wiser and older man proudly exhorting listeners to take that bold step into the future. The heroism isn't with a lone wolf here, it's more with everyone. However, the singer's words and music don't dissipate into the crowd but still packs as much punch into all who listen to it as "Dareka ga Kaze no Naka de" does into that samurai.

I have to thank the uploader for providing the video of Kamijo's appearance at the 1972 edition of NHK's Kohaku Utagassen, and indeed he did get that honour after ultimately selling approximately 700,000 records with "Tabidachi no Uta" peaking at No. 5 on Oricon. As for any questions on the first two kanji of the title: yes, that actually does read as shuppatsu（出発...departure） but in the name of the message for the song, I think tabidachi（旅立ち...setting off on a journey） has more of that dramatic and optimistic flair.