CoCo -- You're My Treasure ~ Tooi Yakusoku（遠い約束） 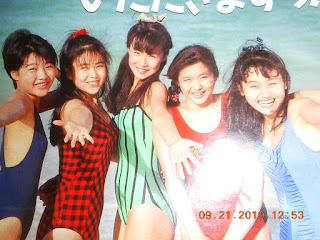 The other day, I was listening to one of those aidoru compilation albums that former collaborator JTM was kind enough to give me and I encountered this particular fun one.

It's been a few years since we've put up a CoCo song onto the blog so the timing is just right. In fact, the song that I heard by this early 90s aidoru group was actually their 14th and final single "You're My Treasure ~ Tooi Yakusoku" (Distant Promise) from July 1994. As hinted in the title, the group used this song to give their thanks to all of the fans for all of the good times and support. It sounds like everyone got their chance to get behind the mike, except for Azusa Senou（瀬能あづさ）who had left CoCo earlier in 1992.

Written by Sayoko Morimoto（森本抄夜子）and composed by Ichiro Hada（羽田一郎）, it's got the light and bright vocals by the ladies alongside those nostalgic 90s electric guitars and synths. Not certain how much longer some of the other aidoru groups in the early 1990s lasted but perhaps there was some poignancy especially with CoCo's final single since there was maybe a feeling that the long age of aidoru was coming to an end. But then came Morning Musume（モーニング娘。）some years later. In any case, "You're My Treasure" peaked at No. 17, and the song was also included on the group's final studio album "Sweet & Bitter" also from July 1994 which placed in at No. 28 on the charts.