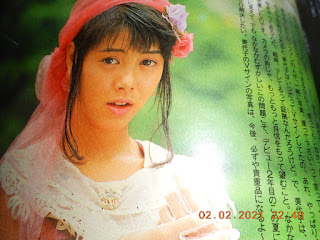 Quite an interesting discovery here.

I hadn't been a great purveyor of the works of 80s aidoru Miyoko Yoshimoto（芳本美代子）when she had her heyday back in the 1980s so I'm as much a contemporary explorer when it comes to her as are some others who are now delving into the teenybopper tunes of Japan from 35-40 years ago (uhh...just aged myself again). Therefore, it is with some intrigue that I'm listening to "Tokyo Sickness" which was Yoshimoto's 10th single from June 1987.

Yesterday, I wrote about Mina Aoe's（青江三奈）"Ginza Blue Night"（銀座ブルー・ナイト）, a bluesy Mood Kayo about love and loneliness in one major area in Tokyo. It seems that we have something similar in theme with "Tokyo Sickness" but of course, the arrangement is all different...and done by Etsuko Yamakawa（山川恵津子）, someone that I will always be interested in for her ways of creating and weaving melodies. This time, she took care of Ken Sato's（佐藤健）melody with Masami Tozawa's（戸沢暢美）lyrics.

As I said, melodically speaking, "Tokyo Sickness" is worlds apart from the 1974 "Ginza Blue Night". It's perky and it seems to have a mix of styles going on in there. Commenters for the video have indicated that it is a City Pop-themed aidoru song although I'm not sure whether Yamakawa, who did have her time with Tohoku Shinkansen, meant it to be City Pop. I'm not sure totally myself although I hear hints here and there with the bass and one particular ghostly keyboard. There is that aidoru perkiness although it's a bit more subdued; at the same time, there also seems to be that Tiki bar-friendly Resort Pop vibe. It's definitely got my attention for that reason. Yoshimoto's delivery even has that slight sultriness which reminds me of NOKKO from Rebecca（レベッカ）.

Underneath Sato's melody, Tozawa's lyrics describe a young woman's Tokyo sickness as something afflicting her as a general malaise against another round of heartbreak in the cold megalopolis. She's become coldly immune to the romantic roundabouts in the various dance clubs and hangouts but doesn't show any hints of sadness. However, she can't quite get out of Tokyo or get Tokyo out of her system. In a way, the whole story behind "Tokyo Sickness" reminds me of Mariya Takeuchi's（竹内まりや）"Plastic Love" from a few years earlier.