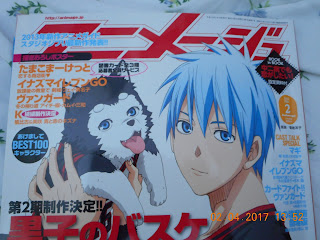 Well, I'll tell ya something. In January 2017, I wrote up an article on pop band fhana's incredibly catchy and beloved "Aozora no Rhapsody" （青空のラプソディ...Blue Sky Rhapsody） and stated that it was the first time that I'd ever cottoned onto an anime theme song even before catching the series itself. That series is "Kobayashi-san Chi no Maid Dragon"（小林さんちのメイドラゴン...Miss Kobayashi's Dragon Maid）, and sure enough, the two theme songs including the ending "Ishukan Communication" (イシュカン・コミュニケーション), performed by most of the cast under the unit name of Chorogons  (ちょろゴンず), and the anime became the talk of the town in those early months.

Of course, there were the various live-action appearances of the cast for the fans' sake which have been placed onto YouTube. One particular video that I remember very well was when Chorogons, voiced by  Yūki Kuwahara（桑原由気）, Maria Naganawa（長縄まりあ）, Minami Takahashi（高橋未奈美）, and Yūki Takada（高田憂希）, went into a sudden dance party for "Aozora no Rhapsody" that was both adorable and awkward at the same time. But it stuck to me like wallpaper.

Let's roll ahead 4 1/2 years later when all of us "Kobayashi-san" fans were wondering whether a second season of the show would ever show up. Well, indeed it has and it will be titled "Kobayashi-san Chi no Maid Dragon S" with the first episode being broadcast in early July on Tokyo MX. Yay!

Returning to that video of the cast dancing to "Aozora no Rhapsody", I wonder if that had been the spark for the immediate above presentation that was just launched on the Lantis YouTube channel today. The song is back on but this time it's the Super Chorogons with the expanded cast helping out in their cover of "Aozora no Rhapsody". It's basically an affectionate near-clone of the original music video by fhana (who make guest cameos) to commemorate the launch of the second season, and happiness still bounds out of the screen. Not sure if the video will be popping up on a later Blu-Ray or if the cover itself will get onto the soundtrack.

Of course, I can't finish things without providing the trailer for "S", and it looks like fhana has come out with another banger of an opening theme.