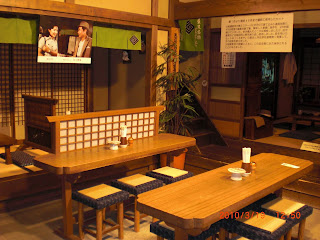 I only visited the Tora-san Museum in Shibamata, Tokyo once near the end of my days in Japan. Having watched many of the movies in the long-running "Otoko wa Tsurai yo"（男はつらいよ...It's Tough Being a Man） series as a boy at the Japanese-Canadian Cultural Centre, I figured that I had to go there at least once and I wasn't disappointed. I got to see a lot of the mockups of the various sets used in the movies, including the one for Tora-ya, the confectionary that is home and workplace for Torajiro's family as you can see above.

When it comes to the folk and down-home New Music songs in Japan back in the 1970s, I always envision settings such as Tora-ya since similar places popped up in the various television dramas and often such songs were used as the themes. Mind you, I don't think band Higurashi's（日暮）May 1978 single "Kokoro no Yane" (Roof of the Heart) was ever used as a theme song for a home drama but once again the hominess of the melody reminds me of those comfortable touch-base restaurants and old-fashioned houses back then.

The lyrics were provided by Higurashi guitarist/vocalist Seiichi Takeda（武田清一）and Naomi Sugimura（杉村尚美）tenderly sings about a woman openly willing to share her heart with the one that she has feelings for. As that wonderful cover for the single shows, there was at least one television drama that had the characters ending up on the roof of their house for that heart-to-heart talk, and I guess that was perhaps an inspiration for the song. I love Sugimura's singing and the chorus coming in during the refrain along with the electric guitar.

Katsu Hoshi（星勝）about whom I mentioned just last week as part of the Flying Kitty Band was responsible for the light and happy music and arrangement. He also had a part to play in the success of 80s rock group Anzen Chitai（安全地帯）in the next decade.