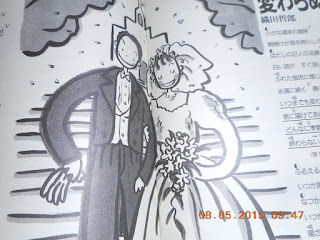 Well, a couple of things that we are seeing today are: 1) Father's Day and 2) the coming of the Summer Solstice in several more hours. As for the first thing, our family tucked into a nice Chinese dinner and as for the second, I'm certainly feeling plenty hot right now.

I had been wondering what I could do on "Kayo Kyoku Plus" to pay tribute to Father's Day today and last week's "Uta Con"（うたコン）episode came to the rescue with a short tribute to the holiday. Through the old videotape, I got to see the late actor/singer Gannosuke Ashiya（芦屋雁之助）perform "Musume yo" (My Daughter). Ashiya had been in show business since 1954 when he was in his early 20s and he sporadically lent his voice to singles beginning in 1960. In fact, after that first single, it would be another nine years before his sophomore effort came out.

But it was his third single, much later in February 1984, which got a lot of ears' attention. "Musume yo" has Ashiya being the stoic and stern Showa Era father, but as would usually be the case when the daughter gets married and leaves for her husband's household, Papa reluctantly lets his guard down to become a little more jellified. Written by Minoru Torii（鳥井実）, composed by Takayuki Matsuura（松浦孝之）and arranged by Takaharu Ikeda（池多孝春）, "Musume yo", which had already been completed three years before release, sounds especially rich and traditional even for a woodsy ol' enka with the harmonica and guitar, but it's those strings that really stand out. All of those instruments stand behind Ashiya's vocals which sound like they truly belong to a proud father from the countryside singing off his daughter to her new life. Tear up much? The voiceover by the singer reassuring his girl that the old man will be OK and that she should be looking forward to being with the love of her life probably had a whole ton of fathers futilely insisting that they weren't crying...just a bit of pollen.😢

There must have been a lot of appreciative fathers and mothers out there. "Musume yo" peaked at No. 6 and eventually became the 7th-ranked single of 1984 with the song winning a special prize at the Japan Record Awards. It also earned Ashiya an invitation to NHK's Kohaku Utagassen that year and sold over a million records. According to his discography, the singer suddenly found himself very busy in the recording booth for the next several years. Ashiya passed away in 2004 at the age of 72.