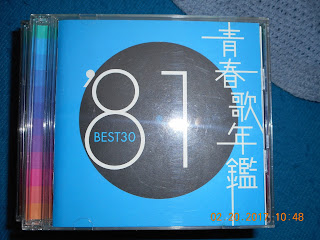 I've always been intrigued by the unsung singers and musicians since I started this blog nearly 10 years ago, and one of those folks is singer-songwriter Masayo Kawaguchi（川口雅代）. When I first wrote about her "Salmon Pink"  (さあもん ぴんく) which was a track on her first album, "Salute - Go-Aisatsu"（SALUTE 〜ご・あ・い・さ・つ〜...Greetings） from 1981, I likened her and the song to what Taeko Ohnuki（大貫妙子）had been doing in the late 1970s.
Well, it's then been interesting listening to this 1981 single from Kawaguchi, "Memoirs". Written by Fumiko Okada（岡田冨美子）and arranged by Jun Sato（佐藤準）, it was Kawaguchi who was behind its composition which once again reminds me of Ohnuki although this time, it's the Ohnuki of the early 1980s when that singer decided to make her right turn from New Music and City Pop towards technopop and a more European sensibility. Kawaguchi doesn't sound anything like Ohnuki but "Memoirs" has that mixture of being in a futuristic Tokyo and a romantic Paris, and it certainly sounds like something that Taeko could have created for Kawaguchi.
From her J-Wiki article, "Memoirs" didn't make it onto her two albums which were released in 1981 and 1998, so this particular single is probably among the rarest of the rare out there.
Posted by J-Canuck at 3:41 PM