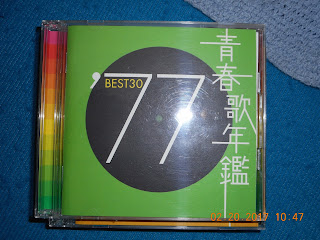 Singer-songwriter Yukio Sasaki（佐々木幸男）is someone that I discovered thanks to "Kayo Kyoku Plus" and I was surprised to realize that I first wrote about him very early on in the history of our blog...back in September 2012, in fact. That was the article for "September Valentine", a well-covered classic created by lyricist Atsuko Saito（斉藤敦子）and composer Yasuhiro Abe（安部恭弘）, but Sasaki was the original singer although I believe that the definitive version is the one given by Tohoko Shinkansen（東北新幹線）in 1982.

Sasaki is known as a folk/pop singer but in his debut album "Bo~ Bo~"（ほーぼー）from August 1977, he sings an easy-on-the-ears and adorable tune titled "Koko de Natsu wo Miokuru" (Seeing Off Summer Here). One of his own creations, it's an even mellower trip to Margaritaville as the story has a guy getting his girlfriend to join him on a nice little trip down to the harbour to enjoy the hot season.

Along with the Orange Mimosa and beach umbrella-friendly arrangement, I also enjoy Sasaki's high-toned vocals especially when he goes for that falsetto. I can easily imagine him actually singing "Koko de Natsu wo Miokuru" near that beachside café. As for the meaning of that album title, I'm not sure except maybe "Bo~ Bo~" is supposed to be the onomatopoeia for a ship blowing its horn...maybe?