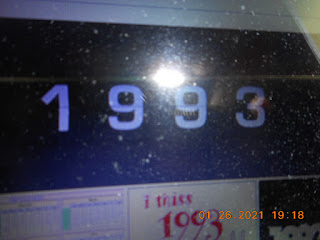 Nelories was one of those bands that I sometimes read about in the local record store magazines such as the ones given out at Tower Records. Considering that their time together was between 1991 and 1995, vocalist/accordionist Jun Kurihara（栗原淳）and guitarist Kazmi Kubo（久保和美）(who started the band in high school) must have left quite a legacy since I was reading about them long after their breakup which was perhaps a year after I had arrived in Japan in late 1994. However, maybe that legacy has been more appreciated by Western audiences than Japanese listeners because though Nelories has their Wikipedia entry, brief as it is, there is nothing about them on J-Wiki (although the Wiki article notes that "Mellow Yellow Fellow Nelories", their 1992 debut album got praise in Japan). There is a brief blurb about them on Tower Records itself.

Tower Records has described Nelories as a Flipper's Guitar-like Neo-Aco duo, a genre that has been used to describe other bands such as b-flower that I wrote about last week, but the Wikipedia biography on them has categorized Nelories as an alternative rock/indie rock band. I also saw something there about a connection with the legendary Ramones. However, that connection was that the ladies referred to themselves as Jun and Kazmi de Nelorie in the same way that everyone in the Ramones had to have Ramone as their family name.

Still, when I listen to "Your Smile", a gentle ballad created by Jun about appreciating someone even if their facial appearance isn't classically beautiful, I think of Nelories as an indies pop act. Jun's accordion and Kazmi's guitar bring the atmosphere into a small intimate café and the former's vocals are heartfelt. The song belonged to their 1993 EP "Indie Pop Car Baby".

Also, as their Wikipedia bio states, Nelories released "... three full studio albums, six extended plays, and one single". Following their breakup in 1995, Kurihara and Kubo continued their careers on their own.