The Monsieur -- Hajimete no Eki（はじめての駅） 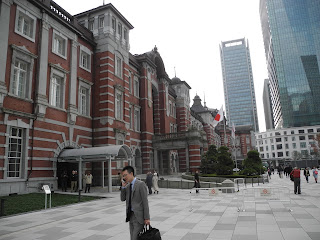 My French-language ability has deteriorated although as a Canadian I had to take several years of mandatory French as a part of my education. The reason is that I focused on Japanese instead through Japanese Language School downtown and then four years of learning in my Japanese Studies major at the University of Toronto (still it took my lives in Gunma and Ichikawa to finally cement any fluency in the language).

But getting back to French, I learned how to pronounce the word monsieur pretty quickly (/məˈsjɜːr/ or mə-SYUR), so it was a tad jarring when I first heard how the Japanese handled the French word for "Mister" or "Sir". It comes out sounding like "moosh" as if someone pulled out of time from hundreds of years in the past had tried to say the other word for oatmeal before he learned about the Great Vowel Shift. I had always wondered what was up with the name for the late guitarist for the Group Sounds band The Spiders, Hiroshi "Moosh" Kamayatsu（かまやつ "ムッシュ" ひろし）until I realized that he was actually Monsieur Kamayatsu.

Well, I've found another musical entity in Japan with monsieur and that would be the folk trio The Monsieur（ザ・ムッシュ）. There's no J-Wiki entry on this band and I've had to pull in information from a few different Japanese blog pages, but let's start with who they are: Yuuji Yamamoto（山本雄二）, Akira Tokunaga（徳永章）and Kouichi Dobashi（土橋広市）. According to one of those pages, they made their debut on record in 1969 with "Tomodachi"（ともだち...Friends）. Their star was rising within the Kansai folk circuit (they were placed alongside Alice and Billy Ban Ban) when The Monsieur were asked if they would come out with a record, and "Tomodachi" turned out to be that single.

The above concert video was of The Monsieur performing in 1976 according to the uploader but the song that they're doing here is "Hajimete no Eki" (First Station) which came out in November 1974. Written by Fumiko Okada（岡田富美子）, the song was composed by band member Tokunaga with arrangement by folk stalwart Ichizo Seo（瀬尾一三）. Unfortunately, I couldn't find any video with the original record version but this live version is still plenty sumptuous with the combination of strings, flute and banjo, and I think that it's quite the classy folk song that even the lords and ladies of a manor could dance to.

"Hajimete no Eki" was also a track on their December 1975 album "Dengonban"（伝言板...Message Board）. I don't know how long The Monsieur lasted in its initial run, but I'm hoping that they're still together doing reunion shows. Maybe someday they might show up on NHK's "Uta Con"（うたコン）.