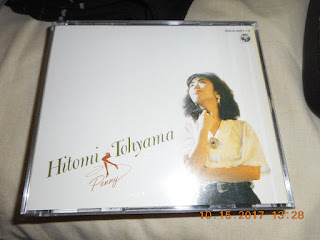 I gather that with any country's popular music, there will be a fair share of songs that are named after women. Japan is no exception and over the years, I've come across "Irene", rumours about a "Cathy" and even "Sachiko".

Well, I've encountered another "Cathy" but this time it's not Junko Ohashi（大橋純子）relating the tale again, but Hitomi "Penny" Tohyama（当山ひとみ）behind this slightly bittersweet tale set to music. A track from Penny's 1983 album "Sexy Robot", it's a mellow and soulful ballad about someone helping out Cathy over the phone as she is crying over some the trials and tribulations of love as relayed in the lyrics by Chinfa Kan（康珍化）. Cathy may be suffering the romantic blues but the fairly happy-go-lucky music by Yoshihiro Yonekura（米倉良広）lets us know that this is probably nothing new for both the lass and the counseling friend on the phone and everything will be as right as rain in no time.

As usual, Tohyama handles the vocals with aplomb. She hits the high notes and provides some nice smoke in her delivery. My compliments on the keyboardist as well.