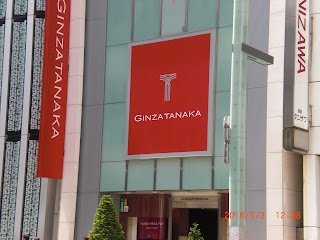 I took this shot of Ginza Tanaka back when I was making that quixotic walk from Asakusa to Shibuya in 6 hours (the one where my feet almost sued me for divorce). Didn't quite know what this company was up to, but I did find the website and it focuses on jewelry and other metal accessories. I'm sure that none of the products are within my disposable income range.

Additionally, little did I know that the Mood Kayo group, Los Primos（ロス・プリモス）, was still at it even into the 1990s, but their discography shows that they were still releasing the old-style music of the bars and other drinking establishments as recently as 2006. In fact in 1996, to commemorate their 30th anniversary of the release of their first single, they released their 70th single, "Itsumade mo Ginza" (Ginza Forever) in September.

Los Primos were releasing plenty of songs celebrating one of the richest neighbourhoods on the planet including their famous "Ame no Ginza"（雨の銀座） from 1967, and "Itsumade mo Ginza" still possesses that old-fashioned classy Mood Kayo arrangement of strings, bluesy guitar, marimba and chorus as the late Shoji Mori（森聖二）gives his love letter to Ginza. "Itsumade mo Ginza" still feels like that old nightclub back in the swinging Economic Miracle days of the 60s and 70s. Lyricist Junko Takabatake（高畑じゅん子）and composer Hiroyuki Nakagawa（中川博之）were behind this particular entry.