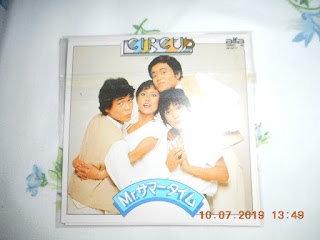 Happy Saturday...and most definitely so for the sun worshippers because we're under a heat warming here in the GTA. This is indeed rich since last Friday, we were hit with winter which included snow flurries. There's never a dull moment in Southern Ontario if you're a meteorologist.

Currently, I'm in a bit of a holding pattern just before another taping session with Rocket Brown for another album but while I'm waiting, I think that I can put in an article before show time. This is "Beautiful Our G", a song by the vocal group Circus（サーカス）, and the video above is thanks to Marty McFlies.

I was trying to figure out the meaning of the title for a while when I found out that this most optimistic-sounding tune was meant to be the theme song for a festival that was held in 1985 on Awaji Island in Hyogo Prefecture. Released in December 1984, the Our G part in "Beautiful Our G" is a pun on Awaji. Amazing what a lax attitude to English syntax can bring to Japanese pop song titles! With lyrics by the legendary Yu Aku（阿久悠）and shiny and happy melody by the one-and-only Fujimal Yoshino（芳野藤丸）, the sweet vocal stylings of Circus provide a summery sheen to this tribute to the island. Marty has put up the whole single consisting of the original song followed by the instrumental version.