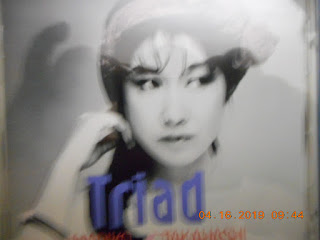 Actress Hitomi Kuroki（黒木瞳）has been a familiar face on the big and small screens for decades, and I first got to know her through the movie "Shitsurakuen"（失楽園...A Lost Paradise） based on the original novel by Junichi Watanabe (渡辺淳一) which became all the rage during its year of release in 1997.

Although her height is 163 cm, she has always stood tall and elegant on screen with a very appealing vocal delivery which is most likely because of her training in the Takarazuka Troupe. Perhaps she might be known to Western audiences because she was in a J-Horror film when that particular genre was being remade into Hollywood movies. Kuroki starred in the 2002 "Honogurai Mizu no Soko kara"（仄暗い水の底から...From the Depths of Dark Water） which was adapted into "Dark Water" with Jennifer Connelly in 2005.

Her film debut though came with "Keshin"（化身...Incarnation） in 1986 as she portrayed a Ginza nightclub hostess in her mid-20s in an affair with a literary critic acted by Tatsuya Fujii（藤竜也）. As with the aforementioned "Shitsurakuen", the movie was also based on a Junichi Watanabe novel of the same title.

The reason that I have gone into cinematic adaptations of novels of trials and tribulations of passion is that I've become quite enamored with the theme song for "Keshin". It can be quite hard to find a YouTube video of an original Mariko Takahashi（高橋真梨子）song so I was quite happy to encounter this theme titled "Tasogare Bito" (People of Dusk).

First off, I have to tip off my hat to the uploader or whoever concocted this slick video which melds scenes of Ginza and the actual movie. Obviously, I also give my compliments to Takahashi and all of the folks behind the creation of "Tasogare Bito": lyricist Goro Matsui（松井五郎）, composer Toshio Kamei（亀井登志夫）and arranger Joe Hisaishi（久石譲）. Although I'm not sure if I would categorize it as a City Pop tune, it's properly urban, elegant and smoky at the same time as if it's the melodic equivalent of that seen-it-all done-it-all hostess wrapping suitors around her well-manicured finger. Plus, there is an overall aura of almost James Bondian mystery surrounding the proceedings here and I think "Tasogare Bito" could have become one of the many ending themes for the weekly TV mystery drama. Finally, Takahashi's voice is simultaneously haunting and enticing...just the perfect singer for this number which ended up as a track on her 12th album from September 1986, "Forest".