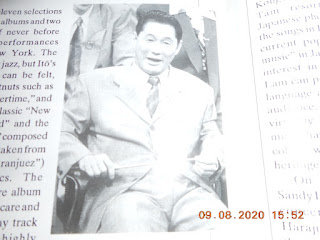 Summer doesn't officially arrive until 11:32 pm tonight but with the weather looking very sunny and hot outside and me needing to put on the ancient fan inside, I think that I can jump the gun by several hours and provide something of the season here.

Why not go with some Beat Takeshi（ビートたけし）then? Yes, indeed this is the comedian-turned-international cinematic auteur that we're talking about here. Around New Year's Eve in 2019, I provided the first Beat Takeshi song on KKP with "Asakusa Kid"（浅草キッド）, an autobiographical ballad with him humbly singing about his origins in show business. This time, though, I give you his 2nd single, "Itaike na Natsu" (Nice Summer) which came out in February or June 1981.

"Itaike na Natsu" wasn't a Beat creation but a song written by Kiyotaka Norishige（教重清隆）and composed by Kunihiko Kase（加瀬邦彦）and arranged by Ginji Ito（伊藤銀次）. I'd been wondering about providing another song whose melody was made by Kase since I'd provided an article yesterday involving his efforts with the band Takeshi Terauchi & Blue Jeans（寺内タケシとブルージーンズ）, and it looks like providence has given me a hand. Indeed, "Itaike na Natsu" sounds like some "Beach Blanket Bingo" tune with the boss saxophone, lanky guitars and the overall doo-wop feel of it all...a perfect fit for that Harajuku 50s fad that was going on at the time. And would you get a look at young Beat Takeshi on the cover? He's got quite the mullet beginning to come in with the surf.