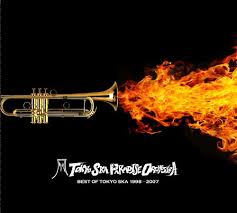 Yep, the cover does say it all: a trumpet with fire blasting out of it like a volley from The Human Torch. This belongs to Tokyo Ska Paradise Orchestra's（東京スカパラダイスオーケストラ）3rd compilation of BEST hits, "BEST OF TOKYO SKA 1998-2007" that was first released in March 2007. If you're looking for some Saturday-night partying at home with that ska beat, this can help.

I don't think that I ever gave a proper introduction about TSPO so I will import this edited quote from the Wikipedia article on this group that has been around since 1985: Tokyo Ska Paradise Orchestra (東京スカパラダイスオーケストラ), commonly abbreviated by fans as Skapara or TSPO, is a Japanese ska and jazz band formed in 1988 by the percussionist Asa-Chang, and initially composed of over 10 veterans of Tokyo's underground scene. At the time, the band's sound was unlike that of any of its contemporaries in the then fledgling Japanese ska scene, and over the course of the past 31 years, they have been influential on Japanese music as a whole. Its sound, the product of the musical influences of its members, is a mix of traditional ska, jazz, and rock. In the vein of many other more traditional ska acts, many of Skapara's songs are purely instrumental.

The first time I heard and heard about ska was in the early 1980s when all this great music was flowing in from the United Kingdom which included this particular genre and its proponents such as The Specials and Madness. For that latter band, "Our House" was a huge hit in Canada, although perhaps the song was more of a mix of ska, pop and New Wave. Little did I know that Japan would be another birthplace of one ska-happy group of guys.

Well, let's get the party started with the first track "DOWN BEAT STOMP" which was originally from TSPO's May 2002 album "Stompin' On DOWN BEAT ALLEY". The album hit No. 1 on Oricon and "DOWN BEAT STOMP" pretty much has everybody getting onto the dance floor with an increased number of TSPO members getting behind the mike. The video certainly reflects the atmosphere of fun of booze and dancing. TSPO bassist Tsuyoshi Kawakami（川上つよし）was the composer while baritone saxophonist Atsushi Yanaka（谷中敦）took care of the lyrics.

Also from "Stompin' On DOWN BEAT ALLEY" is "Mekureta Orange" (Peeled Orange). As well, this was actually TSPO's 20th single from August 2001 that peaked at No. 35 on the charts. Over the years, I've been enjoying the band's work with other cool artists. For example, there is their collaboration with happily zany Hiroto Komoto（甲本ヒロト）of The Blue Hearts for "Hoshi Furu Yoru ni"（星降る夜に）that is also included on Disc 1. And then there is "Mekureta Orange" which has special guest Takao Tajima（田島貴男）, aka Original Love（オリジナル・ラヴ）, helping out on this mix of ska and swing jazz. It was also Kawakami and Yanaka behind words and music here. I tried looking at the lyrics and I think the story sounds as if a couple of guys were greeting the sunrise with a mix of bleary-eyed exhaustion and possibly some scars. Would you like a brawl with your boilermaker, sir? Not sure where the orange peel comes in...except as a garnish in a cocktail glass.

The instrumental "Hi no Tama Jive" translates into "Fireball Jive" which is a great title for this song which was the band's 17th single from May 1999. TSPO multi-instrumentalist (bass, saxophone) Tatsuyuki Hiyamuta（冷牟田竜之）was responsible for this true fireball which not reminds me of the swing/jazz revival sometime in the 1990s but also of the orchestra that was providing the great music in Jim Carrey's "The Mask". Despite all of the action and flame, there is also some poignancy to "Hi no Tama Jive" since this was drummer Tatsuyuki Aoki's（青木達之）final single with TSPO before his untimely death. He passed away only 10 days before its release.

Hiyamuta and TSPO trumpeter NARGO were on words and music respectively for "SKA ME CRAZY" which has been described in J-Wiki as having a skinhead reggae arrangement in its recorded form. Sounds a bit scary there so I've put up their live version which is apparently a little different. It's another jump-and-dance-and-headbang number, and judging from the above video, you will believe a pianica can rock. "SKA ME CRAZY" was also the coupling song for the band's 22nd single from February 2002, "Utsukushiku Moeru Mori"（美しく燃える森）, another duet this time with Tamio Okuda（奥田民生）from the rock band Unicorn.

"Ginga to Meiro" (Galaxy and Labyrinth), TSPO's 23rd single from February 2003, is a familiar song to me and that's probably because I heard it on the various music shows. It was used as the theme tune for the Fuji-TV drama "Bijo ka Yajuu"（美女か野獣...Beauty or Beast） so I gather that its commercials were also playing the song as well. Still a lot of fun ska to be experienced here, too, but it's also noticeably mellower than some of TSPO's other party favourites, maybe along the lines of the aforementioned "Mekureta Orange". Yanaka and NARGO were behind words and music respectively with drummer Kin'ichi Motegi（茂木欣一）on vocals as the single broke into the Top 10 at No. 9.

One more track that I will throw in is an instrumental cover of Donald Fagen's "Walk Between Raindrops" from his 1982 classic album "The Nightfly" for which I've already covered "I.G.Y." in a ROY article. Listening to this version, I can understand why TSPO decided to tackle it because that original shuffle beat works so well with these guys. Heck, I swear that the band even borrowed the same organ from Fagen that starts the song off.