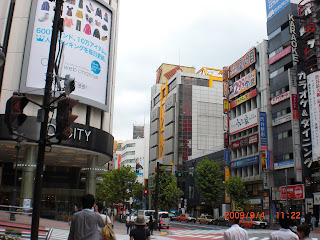 Ahh...good ol' Tower Records in Shibuya. Hope the store is still there when I come visiting next time. I will get my basket of CDs and then have a latte or lunch in that 2nd-floor café. Speaking of which, along with the steadily decreasing infection rates here in Toronto, the other good news is that restaurant patios and non-essential stores opened up for the first time in months. Consequently, there are many happy Torontonians today and tonight and I'm hoping that things will continue on the right course so that the economy will finally fully open up.

Perhaps I can then throw in some happy-happy-joy-joy City Pop to continue the night shift of "Kayo Kyoku Plus" for this Friday in June. This is by TOSHITARO and it's the title track from his June 1987 album "Romantic Noise" and it's a pretty cheerful strut in the concrete jungle of Tokyo with plenty of jingle-jangle keyboards, wailing electric guitar and the singer himself leading the vocal charge.

Written by Suzanne K. Kim and composed by TOSHITARO, if there had been a music video for "Romantic Noise", it probably would have had the guy actually in that black suit strutting down Chuo Dori with a bunch of dancers in tow. Memories of MTV! Speaking of "Romantic Noise", the last article that I did for TOSHITARO was for another track from the album, "Lazy Tune", which is also a supremely cheerful number.