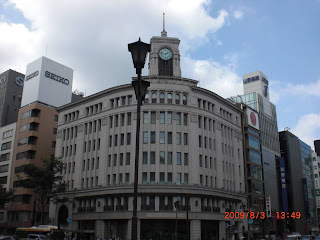 What were some of my go-to places in Ginza? Actually, there were quite a few of them despite the famous expense that the Tokyo neighbourhood has hinted at. One of my favourite music stores, Yamano Music, was situated a couple of doors down from the Wako Clock that you see in the thumbnail above, and there was also Ito-Ya, the stationery shop with the huge red paper clip as a big landmark, heading down the main strip toward Kyobashi on the south side. The very first branch of McDonalds in Tokyo at least was set up just south of the main intersection and I remember with great fondness The Farm Grill right by the border between Ginza and Shinbashi. The Farm Grill was this big buffet restaurant that my friend and I visited from time to time. It cost about 3000 yen per person for all-you-can-eat, and yep, we ate all we could.

Well, a couple of days ago, I wrote about Mood Kayo group Los Primos（ロス・プリモス）and one of their tributes to one of the world's most expensive neighbourhoods, and now I've got another Mood Kayo tune about Ginza. However, this time, it's by the late sultry singing seductress Mina Aoe（青江三奈） and the title is "Ginza Blue Night".

Released as her 36th single in September 1974, Aoe was one of the earlier kayo singers to musically hop from place to place around Japan whether it be a quarter in Yokohama or up a northern city among other regions. For her placement in Ginza, the singer trills about the ups and downs of love in the area, presumably through the various swanky nightclubs with a mix of that Mood Kayo and swing. Jun Hashimoto and Tadashi Yoshida（橋本淳・吉田正）were lyricist and composer respectively for "Ginza Blue Night" which earned her another invitation onto NHK's Kohaku Utagassen for that year, although I don't know how it did on the Oricon charts.

If anyone is interested in tackling the song at karaoke, get that smokiness in your voice. Perhaps knock back some libations beforehand.