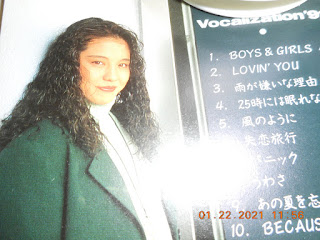 The more that I go further down the road learning about Miho Morikawa（森川美穂）, the more I get interested in her songs. Since first learning about her via the 1990 anime "Fushigi no Umi no Nadia"（不思議の海のナディア...Nadia, The Secret of Blue Water), for which she provided the opening and ending themes including the dynamic pop/rock "Blue Water", I've discovered that she had started out as a regular mid-80s aidoru with "Kyoshitsu"（教室）and then fairly quickly jumped onto the City Pop/J-R&B bandwagon going into the later part of that decade.
Well, I've been enjoying this really refined ballad from her November 1988 album "Ow-witch!" which sounds like an epithet that Bugs Bunny once threw out after he hit his head. "Eien ga Owatta Asa" (The Morning Eternity Ended) already has a great title but it also benefits from the light soul (maybe Quiet Storm?) provided by composer Julia and arranger Jun Sato（佐藤準）. There's also some added class thanks to that soft jazzy piano.
Keiko Aso's（麻生圭子）lyrics relate the story of a woman who's gradually coming out of her funk from a relationship that is now in the past of her life. As one line puts it, no matter whether that fellow is in or our of her life, she's still there and she will be the pillar to support herself. I remember Morikawa going for some more of those lower-register vocals when she recorded "Blue Water", but with "Eien ga Owatta Asa", she aims for high and floaty. The song as a whole is a good reminder of how female vocalists and/or songwriters such as Miki Imai（今井美樹）and Akiko Kobayashi（小林明子）were enjoying some richer and perhaps more velvety melodies in the late 80s and early 90s.
As for "Ow-witch!", it reached No. 12 on Oricon on CD and No. 16 on LP.
Posted by J-Canuck at 4:26 PM