Michael Jackson -- Rock with You 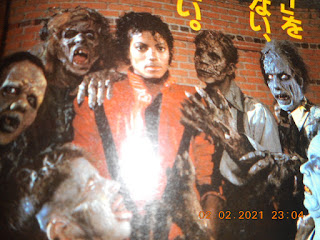 "Thriller", "Billie Jean", "PYT", "Human Nature", "Beat It"...the list goes on for the Michael Jackson hits which I've enjoyed over the years. But there is one song by the late King of Pop that still hits me with those fine feelings of yesteryear and it's truly a reminiscing of youth.

"Rock with You" was released on November 3rd 1979. That combination of the opening rat-a-tat-tat drum and then the spacey synthesizer has been my ASMR trigger for my ROY moment all these decades, and the way that Jackson just purrs those opening lines truly emphasizes that one line in Rod Temperton's lyrics: "Relax your mind". Despite that title, the song is cool and cooling.

The song was called a disco tune in a year when that very word was most likely being partnered with another word  to become one of the more famous pop cultural catchphrases of disdain, but being someone who never really had an issue with the genre, I do enjoy the funk, soul and AOR of "Rock with You". It's all great but my favourite part of "Rock with You" along with the intro is the middle section which starts with "And when the groove is dead and gone..." when the Seawind Horns led by Jerry Hey and those romantic strings come rolling in. I can imagine an epic scene flying over a major city during sunset when that middle part comes in.

And the amazing thing is that it's probably one of Jackson's shortest songs at just three minutes and change. But Jackson, Temperton, all of those amazing studio musicians and producer Quincy Jones spun some wonderfully shimmering gold with "Rock with You" as it hit No. 1 on the Billboard Hot 100 and even finished 4th on the yearly version of the chart.

One more observation that I had was before I saw the video for "Rock with You", I hadn't remembered seeing Jackson for several years since his time with the Jackson 5 in the early 1970s when he was just this little kid, and most of my sightings of that group was through their Saturday morning cartoon on ABC. So to see this really lanky happy young man in the sparkling suit appear in front of a laser beam and rotating fog was quite the thing.

Anyways in making my usual search for what was also coming out in Japan at the same time, I discovered that quite a few classics did come out at around the same time as "Rock with You".