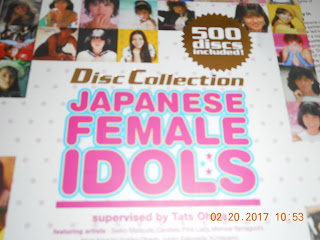 Looks like parts of the Great White North have become the Great Red North. The West Coast is blazing with heat and humidity and the same appears to be happening in Ontario. At least, it's not a new thing here in Toronto. As I've always said, weather in this neck of the woods is predictably unpredictable.

Perhaps the same can be said about the aidoru industry in the 1980s. All of these solo teenage acts were pouring into the entertainment industry but probably the vast majority of them had their five minutes of fame before fading away with a relative few becoming superstars. I've covered a few of them over the years with "Kayo Kyoku Plus", and another one is Norie Hayashi（林紀恵）.

A native of Sapporo, Hokkaido Prefecture, Hayashi may have been bitten by the show business bug, according to an August 1981 issue of "Kindai Eiga"（近代映画...Modern Movies） via J-Wiki, thanks to getting voted as the most popular student in her elementary school due to her optimistic and refreshing personality and then becoming interested in aidoru Mako Ishino（石野真子）when Hayashi became a junior high school student. Following the auditioning process through talent agency HoriPro, she made her own aidoru debut at the age of 16 in the spring of 1981.

Her 2nd single which came out later that year in June was "Suteki na Love Motion" (Splendid Love Motion), a typically breezy summer song with a touch of 50s. Written by Kaoru Asagi（麻木かおる）and composed by Yuuichiro Oda（小田裕一郎）with Masaaki Omura（大村雅朗）handling the arrangement, Hayashi didn't have the usual way-up-high vocals that other singers such as Seiko Matsuda and Naoko Kawai（松田聖子・河合奈保子）had but at least for "Suteki na Love Motion", she had some of that bubbly energy.

Also, according to her J-Wiki bio, Hayashi had a couple of roles on TV dramas and even a stint on a variety show. However, her singing career was very short with only 4 singles, a full album and a mini-album up to 1982. In 1983, once she graduated from high school, Hayashi decided that she would also call it a day to her time as an aidoru because she broke a cardinal rule of being one: she had a romance with a cameraman's assistant and the news got out to HoriPro. Not being able to date freely was one factor in her decision to leave show business and then move back to Hokkaido.