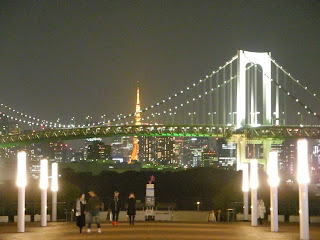 Ahhhh....the song that refreshes and soothes at the same time.

I hear all the time how people who are so extremely keen to get to Tokyo and partake in its activities and scenes. Last week, I provided an article about technopop duo capsule and their newest single in quite a few years called "Hikari no Disco"（ひかりのディスコ）. It was quite the 80s synth-heavy blast and I noted that the music video featured a car ride led by vocalist Toshiko Koshijima（こしじまとしこ）on the main highway by Tokyo Bay. It's the type of scene that would have Tokyo lovers and City Pop enthusiasts swooning.

Well, tonight, I have "Amai Yokan" (Sweet Premonitions) which is a track on urban contemporary duo paris match's 12th original album to celebrate their 20th anniversary in 2020, "Round 12". And this time, I think "Amai Yokan" would be just the thing for a slow romantic walk down in the Odaiba area of the vast megalopolis at night and the above photo is right in that region. Furthermore, instead of the synthesizers, this is more of that lovely blend of Neo City Pop and jazz that paris match has been famous for, as vocalist Mari Mizuno（ミズノマリ）describes one hot, slow and torrid night with a couple. Composed by paris match leader Yosuke Sugiyama（杉山洋介）and written by former member Tai Furusawa（古澤辰勲）, it is quite the blissful sound experience to finish off a good night.