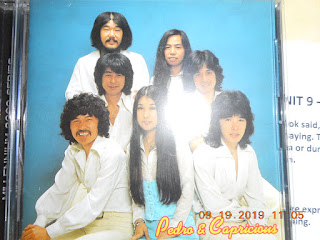 I've been bouncing between the 1970s and the 1980s when it comes to the works of the band Pedro & Capricious（ペドロ＆カプリシャス）so after going way back into their earliest stuff with the rocking rumba of the 1971 "Yoru no Carnival"（夜のカーニバル）, it's time to head forward once more into the next decade with their mellower AOR material.

This time, instead of first vocalist Yoko Maeno（前野曜子）, it's Naoko Matsudaira（松平直子）as the third vocalist for Pedro & Capricious who leads the smooth "Silky Silver Rain", a track from their November 1984 album "Yokohama Rainy Blue". Written by Keiji Mizutani（水谷啓二）, composed by Kengo Kurozumi（黒住憲五）and arranged by Satoshi Takebe（武部聡志）, it's got that 80s arrangement but at its heart, it sounds like a 70s ballad a la Hi-Fi Set（ハイ・ファイ・セット）or Circus（サーカス）thanks to those vocal harmonies by Matsudaira and company.

Looking at the track list for "Yokohama Rainy Blue" in the band's album section on J-Wiki, it looks like it's a collection of their past tunes with new ones such as "Silky Silver Rain" since it also includes the cocktail-friendly "Gafeira Night" from their 1980 album "Oasis"（オアシス）and even the 1973 "Kyokai e Iku"（教会へ行く）when the second vocalist Mariko Takahashi（高橋真梨子）was on board.