Hideaki Tokunaga -- Koibito（恋人）/You and Me 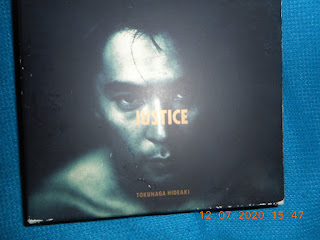 Last night's edition of NHK's "Uta Con"（うたコン）was considered to be an episode of anniversaries of sorts. For one thing, the hosts announced that it was the 200th show under its current title. As well, some of the guests were celebrating their own auspicious occasions, too. One of them was veteran pop singer-songwriter Hideaki Tokunaga（徳永英明）, and I've likely mentioned this before, but he is one J-Pop star who started out looking so shy and innocent with his puppy-dog eyes whenever he showed up on the music ranking shows in the 1980s that he probably attracted not just the teenagers but also the mothers of those teens.

Plus, he also has that softly rasping and plaintive voice which has had fans cooing for the past 35 years of his career, and indeed "Uta Con" did make mention of the fact that at age 60, he's celebrating a 35th anniversary since beginning his singing. So many congratulations to him.

I wanted to make this a 2-in-1 tonight for Tokunaga then. The first song here is "Koibito" (Lover) which is his 7th single from April 1989 and was written and composed by him, and arranged by Ichizo Seo（瀬尾一三）. His vocals fairly caress the ears as he sings about affectionately reminiscing over a past love, trying to re-live happier days. The melody is sad and introspective as it rather reflects that those days are now definitely days of the past to only be seen in retrospect.

"Koibito" seemed to enjoy the number 7 a lot since not only was it Tokunaga's 7th single, it peaked at No. 7 on the Oricon weeklies and it ended up as the 70th single of the year. Also, it was used as the commercial song for Matsushita's (now Panasonic) Eolia air conditioner, and maybe in a way, getting that cold air coming on your head might be appropriate with this song. Of course, Tokunaga fans know that the same appliance had a namesake song by the man a year earlier.

Tokunaga performed this song last night on "Uta Con" as a commemoration of his 35 years in the music business, and he said that he created "You and Me" to acknowledge that he didn't get his success all on his own but also thanks to the many fans who have supported him all these decades. On his J-Wiki profile, "You and Me" isn't listed as a single but it is a track on his 18th studio album "Love Person" which came out a week ago.

His voice may have gone a tad lower but that characteristic wispiness is still intact as he sings along his melody which is also soft and mellow. However at the same time, there are those feelings of hope and gratitude. Not sure myself, but I think the music is also a bit Beatles in arrangement. "Love Person" has gone as high as No. 3 on Oricon and it's his first album in almost 4 years.