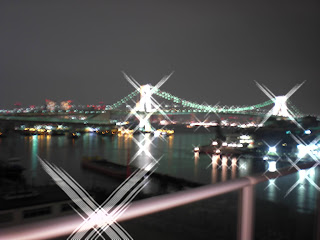 Well, a little over 6 months must mean "fairly soon" in my addlepated head. Yeah, that's what I said when I wrote up the first article for aidoru Megumi Kawashima（川島恵）back in late December. Although she had started as the average teenybopper singer, she then decided to take on a more shibui path just around the mid-1980s and tackled the genre of enka. I wrapped up the article by writing that I would write about a duet that she did with comedian Manzo Saita（さいたまんぞう）...fairly soon.

That duet is here now. "Tokyo Country Night" is a song that Saita and Kawashima recorded together for release in March 1987. Just for information on Saita, he's a fellow who's based out of Nakano Ward, Tokyo (my final posting as an English teacher) and along with him being a comedic TV personality, he's also been a singer since 1980 and even a baseball umpire.

"Tokyo Country Night" is your typical jaunty duo-powered Mood Kayo that probably made for a popular karaoke choice back in those days which was written and composed by a singer-songwriter named Beethoven Suzuki（ベートーベン鈴木）. As for why he's named that way, even his sparse website doesn't divulge that reason, but it does identify this fellow from Ibaraki Prefecture as "a composer with a genius-level intellect in music and comedy." I'll settle for the observation that he enjoys coming up with the comical tunes.

Mind you, I don't think "Tokyo Country Night" is necessarily a comical song. It comes off as that quintessential Latin guitar Mood Kayo with Suzuki sprinkling a lot of shoutouts to various neighbourhoods in the Tokyo area among the trials and tribulations of love. Saita and Kawashima do a pretty good job with the delivery interspersed with some of that scattershot banter.

A decade later in June 1997, Saita released a cover version of "Tokyo Country Night" under the new title of "Ahh, Tokyo Country Night"（ああ東京カントリーナイト）as a solo song with only a slight difference in the arrangement (maybe more guitar). It's still Mood Kayo but this time, the lyrics were changed by Mitchi Dobashi*（ミッチー土槁）and two different versions for the train fans: the JR version and the private railway version. Apparently, it was all about the major stations in the area.

*Couldn't find a confirmed pronunciation of the last name and even Jisho.org couldn't rustle up anything.