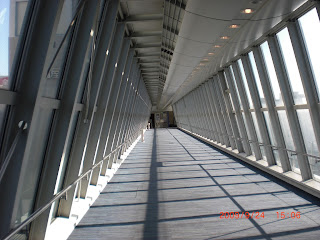 Ooooh...hypnotic. The above is a photo from inside the covered bridge connecting South Shinjuku's Takashimaya Times Square and the venerable bookstore Kinokuniya. I used to traverse back and forth between the two buildings all the time.

Still not sure what the fate of the Tokyo Olympics will be but if there had been a normal Games as scheduled last year, I would have loved to have had Yellow Magic Orchestra come out during the Opening Ceremonies. However even during normal times, that probably would have been a tall order due to the fact that both Ryuichi Sakamoto（坂本龍一）and Yukihiko Takahashi（高橋幸宏）have had their own medical issues in the last several months. I'm certainly hoping that the two of them are on the mend.

Anyways, I wanted to focus on this ripper of a song from YMO's May 1983 album "Uwaki na Bokura"（浮気なぼくら...Naughty Boys） which had been created by Sakamoto and Takahashi. Earlier this afternoon, I was working on the former's non-YMO songs for other artists and then I felt that it was time to put up another YMO song. Well, the song is "Kibou no Kawa" (Expecting Rivers) which I enjoy for Takahashi's rumbling drumming, those down-so-low bass rhythms, and that synth with the melody. As for the lyrics by the YMO drummer, I can only speculate that the rivers are more cosmic than Earth-based.

I'm shimmying and shammying to the song as I'm typing this so there were a number of typos that I'm having to fix. My fine compliments to Chick Norman for this extended remix version; heck, the video can work as an enticement for inbound Tokyo tourism. "Kibou no Kawa" first found ears via "Uwaki na Bokura" but it was also the B-side to the single "Ishin Denshin"（以心電信）. The J-Wiki article for the song mentions that the melody has a passing resemblance to the one for Belgian technopop group Telex's "Something to Say" from their debut album "Looking for Saint Tropez" from 1979. You can judge for yourself.