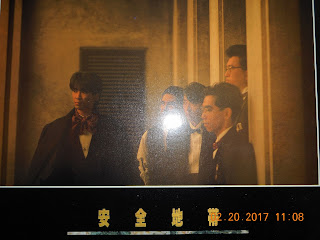 Considering how much of a fan I've been of Anzen Chitai all these years, this Author's Picks article has been a long time in coming, and finally it's here. Actually, the impetus for me to come up with this one is from a conversation that I had with commenter James Noah under the "Ano Koro e"（あの頃へ）article some days ago.

Since I had a fellow Anzen Chitai fan as a friend back in university who used to drive me home from karaoke bar Kuri or the dance clubs, those drives home at night were often decorated with the band's songs which was the best thing. It was all about that distinct moody sound by Koji Tamaki (with his incredible voice) and his band in the early 1980s followed by those stylistic changes beginning from the "V" album in the middle of the decade. Afterwards, things peaked for me in terms of my interest but there was a blip of sorts going into the 1990s. But let me say that those key years in the 1980s were the Anzen Chitai years for me. The interesting thing, though, is that although the band has been listed as a rock band, and Koji and company did rock out on a number of songs, I've always seen them and the songs listed here as something belonging more to pop.

This time, though, I don't have anything particular to add to my choices here since they all have the past commentaries by me. You can just go through the links to their individual articles. Also, before I go, let me also say that it was really difficult to pare down my choices. But I'm hoping that other Anzen Chitai fans can give their own personal choices and maybe even one fellow contributor can provide a counter-list someday.😉