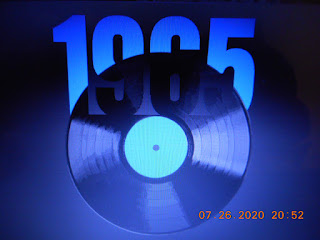 Starting off with colloquial Japanese here. The term yatsu（やつ）had always struck me as a rough word that was used to refer to men and boys. If I were to translate it, it would probably come out as "mate", "fellow", "guy" and the like. A sample sentence is "Kare wa ii yatsu"（彼はいいやつ...He's a good guy!）. But when I checked Jisho.org while thinking about this song here, I found out that yatsu could also be used with women and girls, although the site did also state that it would have to be in a very familiar or even derogatory sense. So, the point is taken; if I ever have to use it, I will still use it just for men.

But the usage of yatsu explains something in the lyrics for the January 1965 debut single of singer Shuuji Kano（叶修二）who came from Niigata Prefecture. Those lyrics were provided by Kaoru Mizuki（水木かおる）and at first, looking at the title and doing a first run through those words, I'd assumed that the story was being told from the woman's point of view since yatsu was being used as the lass was falling for the guy. However, I've realized that it's the opposite; it's the guy who's fallen head over heels with the lady and the yatsu is all for her. I guess in a way, the protagonist is saying something "Ah, she's a swell peach" or something old-fashioned like that.

As for the melody, I had also thought it was an enka tune but now I think that it's more of a jaunty ol' kayo the more I listen to it. It just seems too bouncy to be an enka and the sentiments of love here appear more on the level of puppy love rather than the deeper ideas of l'amour in a typical enka. Minoru Endo（遠藤実）was the one who composed "Suteki na Yatsu" (A Splendid Gal) under one of his pen names, Masanobu Tsugi or Tsugu（継正信）, and Kano was one of the many students who came under Endo's umbrella along with Akira Kobayashi（小林旭）, Masako Mori（森昌子）and Tetsuya Watari（渡哲也）.

Kano's career spanned from the 1960s into the 1970s and he even released his own version of the famous "Sekai no Kuni kara Konnichiwa" (世界の国からこんにちは), immortalized by Haruo Minami（三波春夫）. However, unfortunately, I couldn't find Kano's cover of it on YouTube. After a time, the singer returned to his native Niigata and up to 2013, he was participating in events within the prefecture. But he passed away at the age of 66 in early 2014 from an aneurysm although the news of his death wasn't announced until 2018.