This was another album, Ohashi's fourth, purchased at Tacto from the recommendations of "Japanese City Pop", although remastered Junko Ohashi（大橋純子） albums are now available at the big shops like Tower Records.

Junko Ohashi is another one of those veteran singers who never ended up appearing daily or weekly on countdown shows or in commercials but still garnered a loyal fan base with her music and powerful voice. So, it's a bit ironic that her two biggest hits "Silhouette Romance" （シルエット・ロマンス）and "Tasogare, My Love" (たそがれマイ・ラブ）have her singing relatively quietly.

Even the reviewer for "Crystal City" in "Japanese City Pop", Yutaka Kimura（木村ユタカ）, relates his surprise on hearing the album and realizing how much soulful power she had belted out a few years before her biggest commercial hits came out.

The above video is for the title track right at the top of the lineup. A soul number, Ohashi sends her love for the titular city, whether it be Tokyo or New York, by referring to the 52nd-floor sky restaurant, the highways, the subways and the smell of fresh ink from a newspaper. Clearly, she's taken a more positive attitude toward urban life than Taeko Ohnuki（大貫妙子） who tended to disdain it through some of her songs. Machiko Ryu（竜真知子）was responsible for the lyrics with Ohashi's husband, Ken Sato（佐藤健）, taking care of the music here.

"Funky Little Queenie"was a revelation for both me and Kimura. As the title suggests, this is a funk number on the order of Wild Cherry's "Play That Funky Music" in which Ohashi belts out her inner demons. It was written and composed by the guitarist in Ohashi's backup band, Minoya Central Station（美乃家セントラル・ステイション）. Masami Tsuchiya （土屋昌巳）would later become famous as the lead singer in New Wave/Technopop band, Ippu-Do（一風堂）, famous for their 1982 big hit "Sumire September Love"（すみれ September Love). 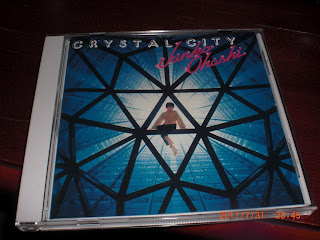