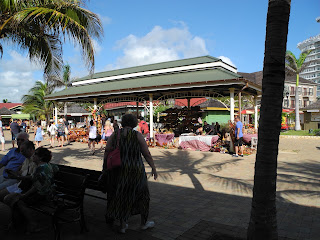 Well, it's neither Urban Contemporary Friday nor summer in the northern hemisphere but I figure that some of us here could use a bit of the hot season and some body-stimulating groove as we get into the early days of February. After all, we're still several weeks away from any hint of spring.

I found perhaps what could be one of the rarest of the rare. From what I could understand from the information listed at disques blue-very, there was a 1982 compilation LP titled "Ocean Paradise", consisting of the works of six local seaside Shonan acts. Many years later, one of those acts' two contributions to the album were released as a special 7" single in 2017.

Yuuji Goto（後藤ゆうじ）provided "Te no Hira ni Himawari no Natsu" (A Sunflower Summer in the Palm of Your Hand) as his first tune. With Goto and Kazuhiro Watanabe（渡辺一弘）providing lyrics along with the former also taking care of the melody and Yuuji Toriyama（鳥山雄司）behind the arrangement, "Te no Hira ni Himawari no Natsu" has got that familiar and comfortable City Pop beat thanks to the keyboards involved. The overall effect, though, is more Tokyo than Shonan (although Tokyo currently has its bayside community of Odaiba). You may as well shake up those cocktails right now.

Goto's B-side on that 7" single is "Misty Moonlight", a laidback reggae-pop mixture that was created by the same guys behind Side A. Now, this is probably music for a relaxing sit-down by the Shonan beach. It's also been labeled as a sub-genre called Japanese Lovers' Rock.  As for what happened to Goto since 1982, I have no idea. For that matter, I'd like to know who that female singer is with her cameo appearance in "Misty Moonlight". 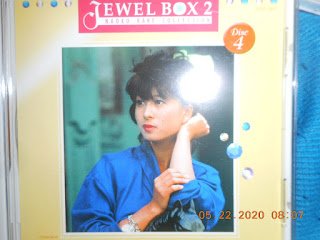 I remember when I wrote up Naoko Kawai's（河合奈保子）1980 "Ohkina Mori no Chiisana O-uchi"（大きな森の小さなお家）on Sunday May 31st 2015. I reported that the day before, the Humidex had hit a steamy 35 degrees Celsius but that Sunday showed a massive plummet in temperature down to a single-digit 9 degrees. Well, guess what? Yesterday, we had a -29-degree C wind chill factor but today's high will be a relatively tropical +3 degrees.

And yep, here is another Naoko Kawai single. Her 18th go is "Kuchibiru no Privacy" (Privacy of the Lips) is another one of those weirdly-titled aidoru tunes that perhaps are still plentiful even today. It was released in August 1984, and it's a fairly rat-a-tat speedy song punctuated with an electric guitar about the drama that ensues following a sudden kiss a young lady experiences.

Masao Urino（売野雅勇）took care of the lyrics with Kyohei Tsutsumi（筒美京平）behind the melody and Shiro Sagisu（鷺巣詩郎）handling the arrangement. It hit No. 4 on the Oricon weeklies and ended up as the 76th-ranked single of the year while winning a number of awards including a Gold Prize at the Japan Record Awards. Kawai also got her invitation to the NHK Kohaku Utagassen for her fourth consecutive appearance at the end of 1984 to perform "Kuchibiru no Privacy".

The past couple of days outside have made our freezer seem like a tropical paradise but by tomorrow, things should be at a more reasonable and seasonable temperature. Still, in a typically wintry Japan, folks will crave something suitably rich, savory and hot. My personal first choice will always go to ramen (especially tonkotsu), but I've also been partial to the dish known as oden.

I've seen old-style stalls in Tokyo serving up this traditional stew with various ingredients as you can see above, but even the modern convenience stores sell the stuff next to the cash registers. Mind you, I've never bought the 7-11 variety but I have been to a few of those stalls with friends. For the record, I love boiled eggs and chikuwa...with the popular condiment of hot mustard.

Commenter Brian Mitchell admitted to me a few weeks ago that he enjoyed his fair share of food-based kayo so hopefully he'll come across this one soon enough. I think it was through an NHK show that I discovered "Oden no Uta" (The Oden Song) by Ichiza Akaruto（荒軽人一座）with the last name being a pun on the term "a la carte". In fact, the entire name can be translated into "an a la carte dinner", and that's what oden is all about: selecting and eating the dish, ingredient by ingredient, while having a good time with friends over beer.

It is a country-folk tune that was first featured on the children's song show on the national network "Minna no Uta"（みんなのうた）back in 1974. Written, composed and sung by Akaruto, whose real name is Toshihiro Takahashi（高橋利宏）, it's an amiable tune about one of those ingredients, chikuwa (a type of fish cake), falling in love with the triangular solidified hanpen (solid triangular fish paste).

I posit that there is no atmosphere of camaraderie than the one at an oden stall. Not sure if the dish has ever made it big on this side of the Pacific but hopefully, there's a chance that it will gain its share of fans here in the years to come. 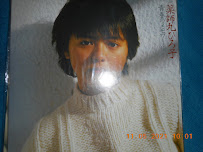 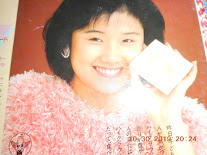 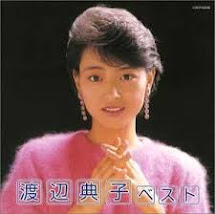 Yeah, I know...I was getting cute with the arrangement again. 🙄 Anyways, for the Gosanke（御三家...The Big Three） file, I first want to thank Noelle for her inclusion of the Sengo Sanba Garasu (戦後三羽烏) a few days ago. Of course, last Saturday I did my bit for the Group Sounds equivalent.
Today, I've opted to take things a little further in time to the 1980s since I did find another trio of young ladies who were given their own trio name. For those who knew their Japanese starlets from that decade, they were Hiroko Yakushimaru（薬師丸ひろ子）, Noriko Watanabe（渡辺典子）and Tomoyo Harada（原田知世）. All three of them have been on "Kayo Kyoku Plus" because of their singing but the trio wasn't put together by the media for their time in the recording booth. Known collectively as the Kadokawa Sannin Musume (The Three Women of Kadokawa), they were most likely formed as such by what was once known as Kadokawa Pictures (now called Kadokawa Daiei Studio, according to Wikipedia) because of their association with the studio as up-and-coming actresses. However, as I said above, since they have also released their own singles and albums, I think that we can put them here, too. Watanabe was the latest to debut with her music in 1984.
Hiroko Yakushimaru -- Sailor Fuku to Kikanjuu （セーラー服と機関銃）
Tomoyo Harada -- Toki wo Kakeru Shojo （時をかける少女）
Noriko Watanabe -- Hare, Tokidoki Kill Me （晴れ、ときどき殺人）
Posted by J-Canuck at 11:41 AM No comments: 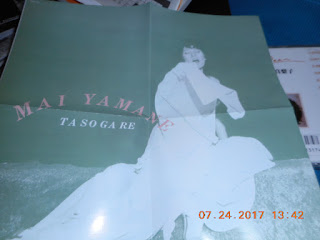 Looks like I've been going for the funk today on Urban Contemporary Friday at "Kayo Kyoku Plus", so I might as well wrap things up for my four contributions with "Turn On Street" by Mai Yamane（山根麻衣）. A track from her March 1981 album "Sorry", there's some good old funk strut going on here judging by that beefy bass which launches things. And methinks that this must have been one heck of a jam session if and when she performed this live at a venue. But at the same time, the last third of the song does have a brief respite of gliding City Pop. Overall though, I did get some feelings of Donald Fagen's amazing "The Nightfly" album via the horns.

Unfortunately, I couldn't peg down the exact bassist who worked on "Turn On Street" although it's a star lineup of Shigeru Okazawa（岡沢茂）, Tsugutoshi Goto（後藤次利） and Yasuo Tomikura（富倉安生）helping out on "Sorry". Shin Kazuhara（数原晋）was once again on trumpet while Jake H. Concepcion took care of the saxophone. Makoto Matsushita（松下誠）was the guy responsible for music and arrangement so I figure that was him at the very end squealing away. According to JASRAC, there was someone named FUNKY CHICK who wrote the lyrics, and I'm wondering if that was actually Yamane being her coy self. 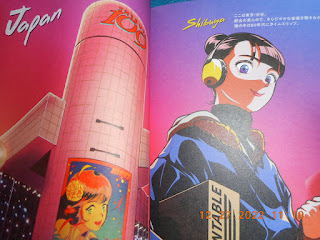 The above is a picture from "Japanese City Pop 100 Selected by Night Tempo", and I was hoping to post it up on one of these City Pop articles. There's an interview there with the man himself that I'd like to translate sometime in the next several days or so.

May 2022 was the last time that I posted up a Mayumi Horikawa（堀川まゆみ）, aka Mayumi, article on the blog, so it's about to time to post up another one. Once again, this is a track from her 1986 album "MAYM", "Lonely Play ~ Me-ism no Yoru" (A Night of Me-ism), and considering the hedonism that was going on during the 1980s, probably on both sides of the Pacific, it was probably a timely title.

Written by Masako Arikawa（有川正沙子）, composed by the singer, and arranged by Shiro Sagisu（鷺巣詩郎）, "Lonely Play" does give that Roppongi vibe of life among the nightclubs and discotheques, and from the title, things sound like it's not all happiness and light after all the dancing is done for the night. The music literally revs up for a night on the town with horns a-blazing and a smoldering rhythm that persists throughout. Some of the scatting reminds me of Matt Bianco while Mayumi is the congenial and sultry guide as the party goes on. By the end, though, we're left with a drunken if soulful piano playing us to the end of midnight, maybe missing the last train home (and considering how early the transit system closed back then, that wasn't difficult to do).

I do have to mention that there was a pretty charged lineup in the recording booth with Fujimal Yoshino（芳野藤丸）on guitar, Naoki Watanabe（渡辺直樹）on bass, Shin Kazuhara（数原晋）on trumpet and Sagisu himself on the synthesizer among other fine session musicians. You can check out Discogs for the lineups for each song.

It's been over two decades since I was last in the Big Apple. Wouldn't mind visiting New York City one more time. I'd like to try the Egg Cream again.
Through the work on this blog, I realized that some Japanese folk artists from the 1970s did make that leap into City Pop of the 1980s. Yet, I was still taken aback when I discovered that had also been the case with folk singer-songwriter Kyozo Nishioka（西岡恭蔵）since the stuff I've had on him up to now was his really folksy discography from the early 1970s. But I guess even he got into the urban contemporary of the times with his 1981 album "New York to Jamaica".
Case in point: one of the tracks is "Animal Night". Composed by Nishioka, written by his wife KURO (I think she's also on background vocals) and arranged by Hirokuni Korekata（是方博邦）, the singer gives his tribute to New York City (she's a funky, sexy and lonely lady) through an intense funk session. Plus, there's some fancy footwork via a piano jazz solo near the end. I wouldn't be surprised if the song and probably the entire album became a tantalizing ad for Japanese tourists to make their way to Manhattan. Of course, as the album title hints, Jamaica can be next on the list.
Posted by J-Canuck at 2:26 PM No comments: 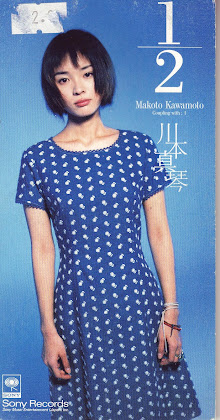