One of the first television programs I caught in my first few hours after arriving with my fellow classmates at the Tokyo Prince Hotel in that torrid July of 1981 was at a nearby eatery. It was just the two other guys and myself and I believe we ended up ordering either gyudon or tendon...whatever it was, there was a goodly amount of rice at the bottom. In any case, up on the tiny telly in the upper corner ledge of the restaurant, Akira Toriyama's（鳥山明） pre-"Dragonball" magnum opus was playing on Fuji-TV, the happily anarchical "Dr. Slump" (1981-1986), starring the cute-if-destructive android, Arale-chan, and the somewhat perverted-if-goodhearted inventor, Senbe Norimaki.

I didn't pay too much attention to the program at the time since I was rather famished and I was enjoying my bottle of coffee milk (perfect for terribly hot-and-humid weather....one of the things I truly miss about Japan now that I'm no longer there), but several days later, as we were with our homestay hosts, the college students from Tezukayama in Nara, my own host, Akiko, recommended that I try the manga of "Dr. Slump" since it was so funny and popular at the time. So I ended up getting a couple of issues and sure enough, I did enjoy them. Actually, I enjoyed the original manga more than the anime itself since the drawings seemed even more hilarious in print. I also looked forward to seeing those guest appearances by Clint Eastwood and Leonard Nimoy from time to time.


Then, a year later, when my brother did his graduation trip from the Toronto Japanese Language School to the country, he brought back a couple of handheld video games. One was the classic Nintendo clamshell Donkey Kong, and the other was a Dr. Slump game with built-in wake-up alarm which consisted of a cute little tune. That tune was actually the theme song for "Dr. Slump" the anime, "Wai Wai World" (Yeah Yeah World). Sung by actress/singer/artist Ado Mizumori（水森亜土）, the theme had those synth boops and beeps that seemed to be in vogue for a number of anison at the time, and reflected that certain genkiness that the main character had....often to the detriment of friend and foe alike. It was composed by Shunsuke Kikuchi（菊池俊輔） and written by Asuna Kawagishi（河岸亜砂）....I hope I got the readings right on those kanji.


My interest in "Dr. Slump" carried on over the next several years. The very first video tape that we put into the ol' Panasonic VHS in 1983 was a couple of "Dr. Slump" episodes, and then during my 2 years in Gunma, I was able to track down the entire manga series and bring the whole kit-and-caboodle home. Unfortunately, after returning from my latest tour of duty in Japan, my series seems to have disappeared somewhere among the boxes of no-longer-essential stuff in my home. 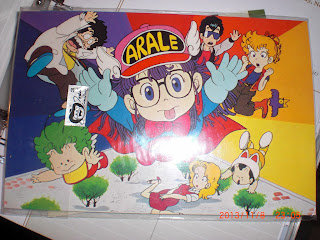 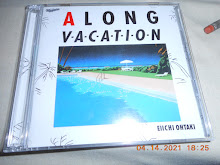