My second Junko Hirotani（広谷順子）article after the one for her debut single "Michi"（道）, "Blue Rainy Station" is Hirotani's 3rd single released in January 1980. For a song that was released in the dead of winter though, it's a pretty non-wintry tune; I cannot envision a single snowflake but then again, the title does have the word "rainy" although I simply think "sunny" because of that really cheerful melody whipped up by Hirotani herself.

Hirotani sounds a bit like another contemporary of hers, Asami Kado（門あさ美）, although that latter singer had a lot more of that mellow ennui thing going. The former singer is definitely singing "Blue Rainy Station" with a fair bit of skip in her step. Machiko Ryu（竜真知子）provided the lyrics here as she had for yet another mellow singer who debuted at around the same time, Ruiko Kurahashi（倉橋ルイ子）. Overall, the song just has that optimism that would make it perfect for radio listening, and I had thought that Hirotani was listed in my book "Japanese City Pop" but actually she is in "Nihon no Josei Singer-Songwriters"（日本の女性シンガー・ソングライター...Japan's Female Singer-Songwriters）with an entry for her 2nd album "Blendy" which came out in February 1980. "Blue Rainy Station" is also a track in there.

I may have heard at least one more track from that album and even from just the cover and perhaps even the typeface for "Blendy", I would be willing to pick up the album if it hopefully still exists at Tower Records or CD Japan. 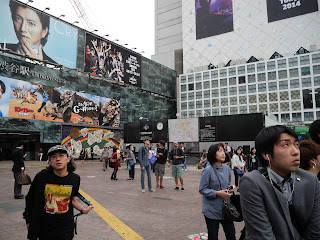