Ah, the Tanokin Trio（たのきんトリオ）, my first instance of seeing a Johnny's Entertainment conglomeration in action on the screen. Everyone knows about Matchy and Toshi-chan but there was the third member who I always thought was the quietest and frankly reminded me of WHAM!'s Andrew Ridgely in terms of profile. That would be Yoshio Nomura（野村義男）...the "no" of the Tanokin Trio who could handle the guitar, and it was the way that I always saw the fellow over the decades. He has always had that disarming Jackie Chan smile but never heard all that much from him, relatively speaking.


I was browsing through one of my ancient "Young Song" booklets, which was the inserted songbook in every issue of the pop music magazine "Myojo"（明星）, when I came across the page for THE GOOD-BYE. This was the rock band with Yotchan (Nomura's nickname) that was formed in 1983. And I figured that if Matchy and Toshi-chan can get their day in the sun on "Kayo Kyoku Plus", well, then Yotchan has to have his due here as well.

At first glance, I was a bit surprised that the J-Wiki article on THE GOOD-BYE didn't categorize it as a Johnny's band but then I found out that Yotchan wasn't the leader but a fellow by the name of Yasuhisa "Yacchin" Soga（曽我泰久）who became the other guitarist and co-vocalist. The other two members were Hachiro "Hachi" Kaga（加賀八郎）and Koichi "Ko-chan" Eto（衛藤浩一）. That same article mentioned that the band was supposed to have been just the backup for Yotchan's debut with the official name being Yotchan Band and then Yotchan & The Good-Bye before settling into its final form. Not sure how Yotchan must have felt with this lessening of his responsibilities.

Their first single came out in September 1983. Called "Kimagure One-Way Boy" (Moody One-Way Boy), I think one YouTube commenter hit it on the head when he remarked that the urgent intro sounded exactly like Frank Stallone's "Far From Over" from that "Saturday Night Fever" sequel. Ah, there was a fair bit of melody lifting at the time. However, the rest of the song by Kantaro Yamamoto（山本寛太郎）has that typical Japanese rock-n-roll beat from the early 80s trying to emulate the feel of the 1950s. Jun Hashimoto（橋本淳）took care of the lyrics about a James Dean type perhaps making his way into an early grave through all of his carousing. There's even a lyrical homage to the Beatles via "twist and shout" and those "Happy Days" tropes of the backseat and double dates. It's a wonder that the Fonz wasn't given a shoutout. Although the band would gradually have both Yotchan and Yacchin singing together, since this particular song was the debut, I think it's just Yotchan here, and to be honest, he doesn't sound too bad when compared to his old trio mates.

THE GOOD-BYE would release a total of 15 singles and 9 albums until they called it a day in 1990. However, the band did get back together in 2003 and has been touring around since then although no new material has come out. 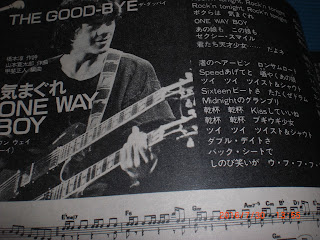