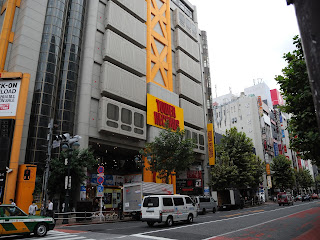 Visiting the CD stores, big or small, major or independent, was a weekly routine. It didn't even have to be the weekend. If I had a goodly amount of time between lessons or if I had time in the morning or late afternoon, I would make my way to one of my regular haunts. Shibuya in Tokyo was, therefore, a must-visit target.

The 3 biggies for me were Tower Records, HMV and Yamano Music in Ginza. And I had those pegged with certain "personalities". Tower was the all-purpose guy and the one that, without fail, I always visited. Meanwhile, Ginza Yamano was the more elegant and old-fashioned gent with what I thought was a bigger storehouse for the old kayo albums although plenty of the contemporary stuff such as the Johnny's idols was also on sale. HMV which was just around the corner from the huge Tower flagship in Shibuya was the lean, mean and eclectic cousin.


So, perhaps it is no surprise that I first heard about the band SEAGULL SCREAMING KISS HER KISS HER (for the sake of brevity and my typing fingers, I will heretofore refer to the band as SSKHKH) at HMV. I picked up one of the store's weekly booklets and saw the name along with a photo of vocalist/guitarist Aiha Higurashi（日暮愛葉）on the cover. It was one of those incredible band names that I could never forget but could never quite remember with 100% accuracy either.

Nope, I will give my full confession and say that I never ventured to listen to anything by them while I was living in the country. However, now that I've been writing this blog for years and SSKHKH will never leave my mind, I decided to finally check out some of their discography. And the one song that popped up often enough was "Sister Sister".

This came from their third album "17" from September 1998. "Sister Sister" stood out because it was counter to my assumptions about SSKHKH. I think some of their other output fit my impressions of them being devoted to thrashy rock, but "Sister Sister" was totally different. It sounded like playful minimalist avant-garde pop and the official video above looked more like what I used to see in the post-midnight out-there music video programs back in the 1980s. It does have that quirkily cute hook.

Now, if I'm not mistaken, the other two with Higurashi in the video are bassist Nao Koyama（小山ナオ）and drummer Takaharu Karashima（辛島孝治）, both who have since left the band.

SSKHKH was first formed in 1992 and has had a number of ins-and-outs in terms of personnel. The band lasted for 10 years until 2002, but Higurashi brought it back out of mothballs in 2014. As for the name, it apparently came out of one of the tracks on an 1984 album, "The Big Express" by English band XTC, titled "Seagulls Screaming Kiss Her, Kiss Her". Higurashi was not only a fan of XTC but was apparently impressed by the length of the title so it was a done deal. Not sure whether the band has had to pay royalties.


Just for curiosity's sake, here is that XTC song. Personally speaking, I prefer their "Senses Working Overtime".
Posted by J-Canuck at 3:38 PM