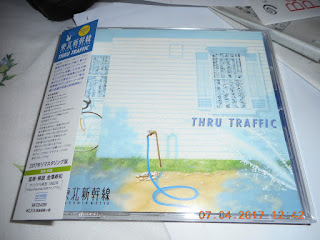 Earlier today, both Rocket Brown and I got together to make our latest album-centered podcast on "Come Along Radio". The target album was one that we had been looking forward to doing for some months so definitely we were very glad to finally tackle it: Tohoku Shinkansen's（東北新幹線）lone 1982 album "Thru Traffic".

Now, I've given my fair share of love to "Thru Traffic" through a couple of articles on the album proper and articles on a few of the individual tracks over the years, and frankly the album articles covered only a few tracks with some of them being repeated from the individual articles since the tracks by Hiroshi Narumi（鳴海寛）and Etsuko Yamakawa（山川恵津子）who made up the short-lived but fantastic duo Tohoku Shinkansen have been just that good. I gather that giving the tracks their own little articles keeps the good times going.

One that had yet to be covered here on "Kayo Kyoku Plus" was "Kokoro no Mama ni" (As You Please). The tracks had Narumin and Etsu doing their own solo work or working together in duets. "Kokoro no Mama ni" was another Narumin solo with him also providing words and music in addition to the vocals. It's an oh-so-soft and lush AOR ballad about a bittersweet story of letting the one you loved go to be with the other person he/she truly loves. The singer-songwriter sings his words in a very tenderhearted matter as if he's floating around the very scene, being careful not to interfere with the sad but necessary separation.

At the risk of giving some of our talk away before the podcast gets put up sometime later, Rocket posited that this was the Christopher Cross track of the album, something that I can agree with wholeheartedly. For me, the arrangement had me thinking a bit of Jimmy Buffett's "Margaritaville". All in all, it's something very hammock-worthy with a cocktail on the adjacent end table.