Now this was a name I'd never heard of before, Makoto Fujita (藤田まこと)... but it could be because I'm not as well versed in the world of actors/actresses as I am with singers. Let's just say the only proper Japanese actor I'm most familiar with and like quite a fair bit is veteran star, Masakazu Tamura (田村正和) for playing the lead role of the eccentric yet sharp detective with little to no sense of privacy in 'Furuhata Ninzaburo' (古畑 任三郎).

I had only discovered Fujita  recently while searching for videos of Enka singer Aki Yashiro (八代亜紀) singing her hit 'Onna Minato Machi' (おんな港町). It was then where I eventually uncovered a video of the Queen of Enka doing a duet with the actor (whom I had learnt also did a little singing) and they sang the 50's duet classic, 'Tokyo Nightclub' (東京ナイトクラブ), originally by the late Mood Kayo crooner Frank Nagai and Kazuko Matsuo (フランク永井 . 松尾和子).

Anyway, Fujita who was probably at least 70 years old at that time, looked polished in that dapper suit which fitted that rather pleasant voice - deep and mellow at some points. Since that voice of his piqued my interest I decided to look for songs by him. And the first proper one that came up in YouTube's search engine was 'Juso no Yoru'. 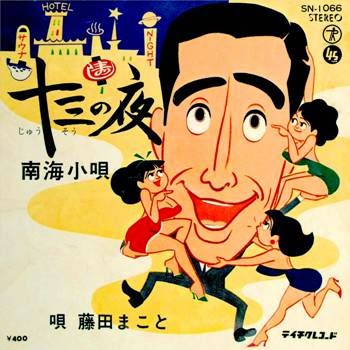 Now I'm not very familiar with places in Japan, so I had no inkling that Juso's a place in Osaka. What's more the characters for Juso (十三) also mean thirteen in the Chinese language, which had me assuming the song - written and composed by Fujita himself - was about being the 13th night of something. But after looking at the lyrics, that didn't seem right since part of the song went like this:

Thus making my assumption... well, an assumption. Only after watching a video with just the song along with a picture show did that confirm that Juso was a place - there were pictures of the train station there with signs saying 'Juso'.

The song itself, released in 1971 (that's all the information I have on it) sounded like the usual Mood Kayo tune you'd hear with the lonely blare of the trumpet at the start. In my opinion, 'Juso no Yoru' seemed to share some similarities in terms of music with another Mood Kayo hit from 1972 on another place in Osaka, 'Soemon cho blues' (宗右衛門町ブルース) by Katsuji Heiwa & Dark horse (平和勝次とダークホース). It's either that or I don't have very discerning ears. Oh well.

I did some research on Fujita... his most well-known role seemed to be from playing Mondo Nakamura (中村主水) in a long-running period drama series called 'Hisatsushi series' (必殺シリーズ) from 1972 which ran well into the 80's and sort of ended in 1991. But it had many of those specials that brought it into the 2000's. Unfortunately he passed away 4 years ago in 2010 at the age of 76.


The video above is of Fujita singing 'Juso no yoru' in 2006 on an episode of 'Kayo Concert'. And if you want to check out the video of him and Yashiro singing 'Tokyo Nightclub', its in the link below.