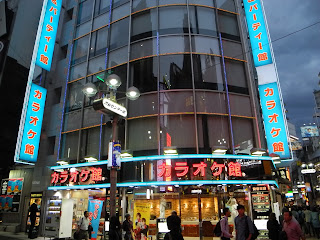 I realize that I should have put these guys up sooner considering their individual pedigree but, hey, better late than never.


For those City Poppers, AB'S is the equivalent of a Reese's Peanut Butter Cup (for those who love the classic chocolate confection) since it has Fujimal Yoshino and Makoto Matsushita（芳野藤丸・松下誠）, two guitarists and singers who are well known within the City Pop/J-AOR genre and who have some good representation in "Kayo Kyoku Plus". I've also come across their albums in my personal music bible "Japanese City Pop" but it's only been now that I am putting this first entry up.

"In The City Night" is a track from the band's self-titled debut album released in 1983. Lots of thumpy bass and guitars to go with the smooth vocals. The song was written by AB'S keyboardist Yoshihiko Ando（安藤芳彦）and composed by drummer Atsuo Okamoto（岡本郭男）who was Yoshino's bandmate from his old unit SHOGUN back in the 1970s.

I was wondering for the longest time about how the band got its name. Apparently it has all to do with blood types which is a huge deal in Japanese society since a person's personality can be determined (not particularly my opinion) by the type of blood one has. In the case of AB'S, Yoshino, Matsushita and bassist Naoki Watanabe（渡辺直樹）all have Type AB while Ando and Okamoto have Type A.

Another potential purchase on the list.
Posted by J-Canuck at 8:15 PM