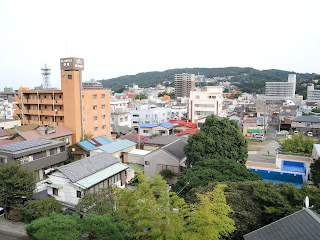 That's the response that I've usually received from friends whenever I tell them a bit about my past. Yup, considering how I look now, I can understand why they may look like they want to do a spit take, but indeed, when I was in junior high school, I actually did run a few kilometres most mornings in the area of my school. Crazily enough, I actually was thin once upon a time but that had just as much to do with those sudden growth spurts of adolescence as it did with my running. Even crazier was I also entered a half-marathon at the Toronto Zoo...and actually finished without spurting out my internal organs like a defensive sea cucumber.


All that preamble just to introduce one scintillating song by guitarist/songwriter Masayoshi Takanaka（高中正義）. Seeing that cover for his 3rd solo album, "An Insatiable High" (1977), I wonder whether he caught onto jogging a few years before the activity got as huge as it did. That title also makes me ponder whether he had also been aware of that phenomenon known as "a runner's high". Yes, I also did experience that when I was running at the zoo...wondering through my huffing and puffing whether I would last much longer when I suddenly hit the perfect stride and things looked and felt a whole lot better.

That's what I thought when I heard the title track from the album. "An Insatiable High" actually goes for over 10 minutes, and its trip sounds and feels like Takanaka is relating a condensed melodic version of a marathon on a sunny day through some great countryside. And perhaps like the perfect run, he has buddies on his journey...some pretty famous ones. According to the article for the album on "Music Avenue", guitarist Lee Ritenour is jamming in there with Takanaka as Steve Forman, Paulinho Da Costa and Motoya Hamaguchi（浜口茂外也）are helping out on percussion with Jun Fukamachi（深町純）providing that nostalgic synthesizer sound. The one surprise is that pianist Patrice Rushen is handling a solo in "An Insatiable High"; I still remember her for "Forget Me Nots".


Considering the easy but fun run that Takanaka and friends take us, perhaps the song already has us in that zone or runner's high. Interestingly at about the 7-minute mark of this 10-minute odyssey, all of the heart-racing activity suddenly slows down into something far more mellow. Maybe it's here that Takanaka has crossed the finish line and we are experiencing the happy relieved collapse and the cool down. To be honest, the first time I heard this, I was a bit disappointed that the jamming suddenly came to an end with three minutes left to go but I think I will actually start appreciating the relaxation coda in time.

As for Takanaka himself, the Tokyo native debuted in 1971 and has straddled the rock and fusion worlds with this guitar. He apparently first participated in the band Strawberry Pass（ストロベリー・パス）with Hiro Tsunoda（つのだ☆ひろ）before getting together with others to form Fried Egg（フライド・エッグ）, and isn't that the perfect name for a rock band of the early 1970s? He also took part in the Sadistic Mika Band（サディスティック・ミカ・バンド）before going solo with his first album "Seychelles" coming out in 1976. His most recent release was his 30th original album "Yonjuu Nenme no Niji"（40年目の虹...40th-Year Rainbow）in 2011.
Posted by J-Canuck at 8:51 PM