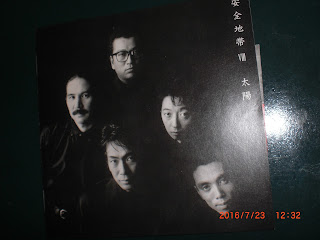 Good ol' stark black & white for dramatic effect! That was my initial reaction to the cover of Anzen Chitai's（安全地帯）8th album, "Taiyo" (Sun) when I first bought it back in 1991. Since it was released at the end of the year in December, it was through "Eye-Ai" here in Toronto instead of purchasing it from the local CD shop in Japan. Considering the money and trouble to pay for an overseas album to come over to my home, there was perhaps a risk in making the purchase since I hadn't been too impressed with the band's previous album "Yume no Miyako"（夢の都...The Capital of Dreams）. My thought after getting that album was that Anzen Chitai had passed its best-by date. Yeah, I know...Koji Tamaki（玉置浩二）has got those amazing vocals but at the time, album VII simply didn't have it for me.

Hopes were definitely raised, though, when I placed VIII into the CD player. That first track "1991-nen kara no Keikoku"（1991年からの警告...A Warning From 1991）had a lot of that old Anzen Chitai sound that I was missing since their huge album "IV" from 1985. Ah, the boys were back. And it was great that they put the sound to work on a pretty moody and dramatic song about being alone against all of the horrors of the news. Plus, Tamaki put another spectacular show with that voice of his. Still, the song has taken some deeper meaning to me when I think about this summer's terrible incidents in the United States and Europe.


Tamaki and longtime songwriting partner Goro Matsui（松井五郎）were responsible for all of the songs on "Taiyo" including the title track. Thinking back on the overall sound of the album, I guess I could say that album No. 8 had an updated version of that sound from the early releases by Anzen Chitai up to "IV". The song "Taiyo" had that sound with an extra layer of Spanish guitars to create something that had me imagining traveling over a savannah. In addition, Tamaki's yell at the beginning could have him instantly cast as one of the cast in "The Lion King".


The band's 21st single "Itsumo Kimi no Soba ni"（いつも君のそばに...Always By Your Side）which came out a month before the album is also here as the crown jewel. And speaking about Anzen Chitai getting back to basics, this love ballad is definitely reminiscent of another previous hit from the aforementioned "IV", "Kanashimi ni Sayonara"（悲しみにさよなら....Goodbye to Sorrow）.


The single was also used as the campaign song for a Toyota commercial back then. There's nothing like a soaring Tamaki delivery to lift everyone and everything up. I'n not sure how "Itsumo Kimi no Soba ni" did on Oricon, though.


My final track here is "John ga Kureta Guitar"（ジョンがくれたGUITAR...A Guitar From John）, a good ol' jam session-friendly song that dispels all of the urban atmospherics that Anzen Chitai was famous for. It just sounds like Koji and the guys getting together around the campfire to have a fun time talking about a beloved guitar which is now in the display window of some shop while the former owner reminisces happily about it. That video above has the band going full throttle on the song, especially Koji who must have had a double cappuccino before hitting the stage. But no complaints here...a happy Koji is a happy audience.

"Taiyo" managed to break into the Top 10 by peaking at No. 7. Nope, perhaps it wasn't like the old days back in the 1980s but I was happy to get the album as an old Anzen Chitai fan. However, No. 8 is the final album of the band that I've gotten to date. At my sister-in-law's request, I bought their 10th album and brought it over to Canada as a Xmas present several years ago, but her reaction to it was an unqualified meh. I guess for me, the band will always remind me of their heyday during my university years.